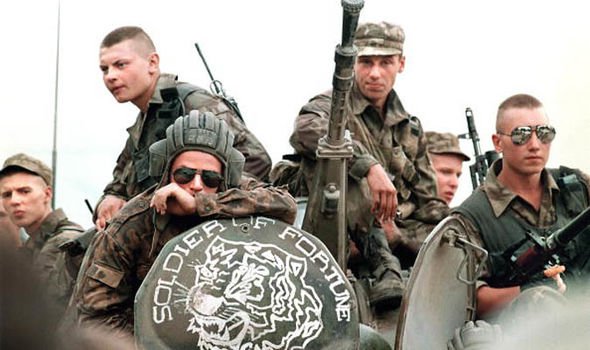 In light of the leaked news that “dozens of Russian mercenaries” may have perished in the U.S. attack columnist David Ignatius, of the Washington Post, wrote about its origin and justification, Russian mercenaries price doubled for the Assad regime. More than likely that is.

Further to that attack, news from Russia keeps getting worse. Fifteen more mercenaries died yesterday as a result of a booby-trap the Russian hire-for-money contractors set for others in an arms depot but instead, the trap blew up in their face.

In addition to fifteen dead Russian mercenaries, the explosion also took the lives of eight members of the Al-Baqir Brigade funded by Iran who, in turn, was funded by Barack Obama, a president who hopes Iran will destroy Israel with the funds he released.

Not to digress, the last note is supported by a notion Obama admires about Iran, which was expressed in the below paragraph written by John Hannah for Foreign Policy Magazine.

And that’s when he [Obama] let loose with this little gem: The Arabs, according to the president of the United States, need to learn from Iran’s example. In fact, they need to take a page out of the playbook of the Qods Force — by which he meant developing their own local proxies capable of going toe-to-toe with Iran’s agents and defeating them. The president seemed to marvel at the fact that from Hezbollah to the Houthis to the Iraqi militias, Iran has such a deep bench of effective proxies willing to advance its interests. Where, he asked, are their equivalent on the Sunni side? Why, he wanted to know in particular, have the Saudis and their partners not been able to cultivate enough Yemenis to carry the burden of the fight against the Houthis? The Arabs, Obama suggested, badly need to develop a toolbox that goes beyond the brute force of direct intervention. Instead, they need to, be subtler, sneakier, more effective — well, just more like Iran.

Sneaky Obama has learned to use Iran as his own proxy to destroy Israel. Anyone who believes otherwise still believes rogue government agents do not spy on Americans.

Who said Assad is winning this war but Assad himself?