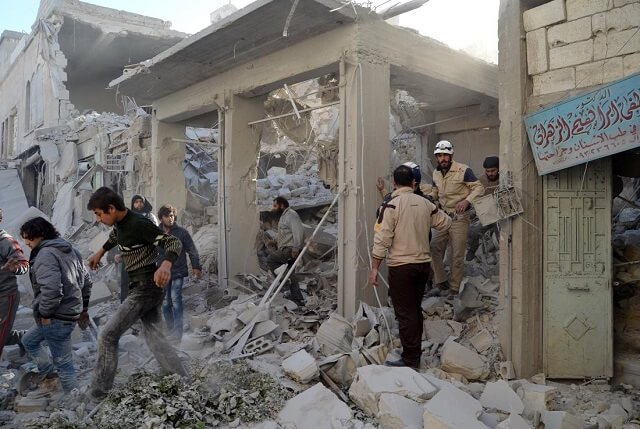 Two months into a bombing campaign in Syria, Russia has caused a lot of collateral damage

One airstrike hit a post office, part of a series of strikes that killed 17 civilians. At least four other attacks targeted hospitals. An airstrike on Sunday hit a marketplace, killing at least 30 people.

Russia’s military intervention in Syria is killing civilians at a high rate in rebel-held areas of the country’s northwest, even as the campaign has failed to produce a decisive shift in the larger civil war between regime of president Bashar Assad and his opponents.

Russia launched a major campaign of airstrikes beginning on September 30 in support of the Assad regime’s fight to maintain and expand the territory it still controls in Syria. The Russian government claims the operation has targeted the extremists of ISIS, but the majority of Russian strikes have actually fallen on areas controlled by mainstream rebel groups opposed to both Assad and ISIS, and often supported by the West.

During the month of October, Russian operations resulted in at least 44 individual strikes that killed between 255 and 375 non-combatants at a conservative estimate, according to Airwars, a watchdog group that carefully combs reports of civilian deaths.

The now two-month-old Russian bombing campaign has also evolved with the shifting tide of the broader crisis in the Middle East. After directing most strikes toward rebel-held areas in the northwest in the early stages of its campaign, it intensified the campaign against ISIS after Russian officials confirmed on November 17 that a Russian airliner had been brought down over Egypt in an attack that had been claimed by an ISIS affiliate.

After Turkey shot down a Russian fighter plane near its own border with Syria last week, there were signs that Russia shifted focus back to the northwest, in apparent retaliation against Turkey and the rebel groups it may support in Syria.

Yuri Barmin, a Moscow-based analyst at Rethinking Russia and the Russian International Affairs Council, said Russia had doubled the number of warplanes operating out of its airbase in Latakia, in northwestern Syria, in a decision issued on November 17, after it was confirmed that the Russian airliner was bombed. “Moscow feels as if it was forced into carrying out strikes [against ISIS] in Raqqa and Deir al-Zour, and now that its fighter jet was shot down over Syria, it says, ‘Okay, we’ll go back to the old strategy and we’ll double our efforts in northwest Syria, even [against] Turkey-supported rebel groups,’” he said.

The front lines between the regime and insurgents in rebel-held cities remain relatively unchanged since the Russian campaign began two months ago. There have been some exceptions, including when government forces broke a siege by ISIS on Kweiris airbase on November 11, breaking an impasse that lasted for over a year and reclaiming a military asset from the jihadists.

But in general, activists, analysts, and monitoring groups say the Russian warplanes have simply bolstered the existing operations by the regime, which to date have killed far more Syrian civilians than any other force in the country. Between January and July of this year, government forces killed 7,894 civilians, according to the Syrian Network for Human Rights (a group critical of Assad), compared to 1,131 killed by ISIS and 734 by armed opposition groups.

In rebel-held Aleppo—once Syria’s largest city, now devastated after more than five years of rebellion—war-weary residents appear to regard the Russian airstrikes as simply one more source of horror. “We see 10 to 15, sometimes 20 airstrikes a day,” says Rami Jarrah, Syrian media activist currently in Aleppo producing a series of video reports documenting the airstrikes. “There’s an atmosphere of despair. The people in general here have gotten used to the war. They don’t believe that a solution is coming.”

In fact, Jarrah says that the Russian airstrikes have picked up some of the slack from the government’s air force, which is in tatters after years of fighting. That means there are now more conventional airstrikes and fewer improvised barrel bombs, which kill indiscriminately when they fall. Regardless, he sees the Russian campaign as a cynical continuation of the regime’s offensive against anti-ISIS rebels. Neither Russia nor Assad “is preventing ISIS from coming to Aleppo, in terms of Russia or Assad,” he says.

Noah Bonsey, a senior analyst on Syria at International Crisis Group, says that part of the reason the Russian campaign has so far failed to deliver a decisive blow against the rebels is that rebel groups have been able to effectively use U.S.-supplied TOW missiles, a potent weapon that brought down a Russian helicopter last week. “The foreign and local dynamics are all meshed together,” he says. “We’ve seen marginal regime gains in some places, and marginal rebel gains in others.”

The Russian military is far from the only force that is killing civilian in Syria. Raids by the U.S.-led coalition fighting ISIS, have killed between 682 and 977 civilians over the length of the entire campaign since August 2014,according to Airwars.

By comparison, the group reports that Russian strikes are killing civilians at a rate roughly 10 times faster than the coalition. Airwars project director Chris Woods says that video footage of airstrikes released by the Russian government indicate that Russian warplanes are using more primitive, unguided munitions. One video shows a Russian long-range bomber dropping “sticks” of unguided bombs from above the clouds.

“That was a very worrying image for us. There is no control of those munitions. Just dropping a stick like that means its going to cause significant damage on the ground over a wide area,” he says. “We’re very used to seeing those images going back to Vietnam or even the Iraq war in the early 1990s, but we don’t tend to see those kind of images anymore, simply because western militaries have changed the way, generally speaking, they fight.”

In addition, Woods said that the number of civilian deaths resulted from where the Russians are choosing to bomb. “There is no doubt whatsoever that Russia is heavily targeting civilian areas.” While the shooting down of a Russian jet by Turkey produced geopolitical concern over the conflict among great powers in Syria, the reality of the war on the ground will be one of ongoing bloodshed among civilians.