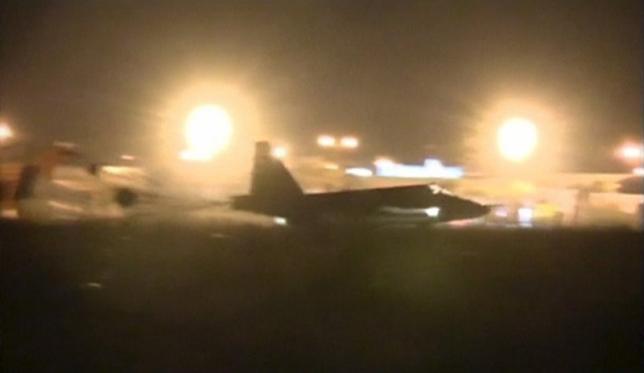 Russia bombed Syria for a third day on Friday, mainly hitting areas held by rival insurgent groups rather than the Islamic State fighters it said it was targeting. Putin is following in the same footsteps as Assad by avoiding completely striking ISIS. Russia mainly bombing Free Syrian Army, not the Islamic State

Washington, which is leading its own air campaign against Islamic State, says Moscow has been using its campaign as a pretext to hit other groups opposed to Russia’s ally Assad.

Some of the groups that have been hit are supported by countries which oppose both Assad and Islamic State, including at least one group that received training from the CIA.

Moscow said on Friday its latest strikes had hit 12 Islamic State targets, but most of the areas it described were in parts of the country where the militant group has little or no sway.

Russia mainly bombing Free Syrian Army, and not the Islamic State as it has been stating over the last three days.

Activists on the ground, which monitor the conflict with a network of sources, said Islamic State had no presence in the western and northern areas that were struck.

They said one of the targets hit in the latest Russian air strikes, the town of Dar Tazzah in northwestern Aleppo province, was controlled by a number of insurgent groups including the al Qaeda-linked Nusra Front.

President Vladimir Putin’s decision this week to launch air strikes on Syria marks a dramatic escalation of foreign involvement in a 4-year-old civil war in which every major country in the region has a stake.

Lebanese sources have told Reuters that hundreds of Iranian troops have also arrived in recent days in Syria to participate in a major ground offensive alongside government troops and their Lebanese and Iraqi Shi’ite militia allies.

Russia’s air campaign in a country already being bombed by a U.S.-led coalition of Western and Arab countries means that the Cold War superpower foes Moscow and Washington are now flying combat missions over the same country for the first time since World War Two.

The United States and Russia say they have a common enemy in Islamic State, which has proclaimed a caliphate across swathes of Syria and Iraq. But they also have very different friends and opposing views of how to resolve a war that has killed at least 250,000 people and driven more than 10 million from their homes.

Washington opposes both Islamic State and Assad, blaming him for attacks on civilians that have radicalized the opposition and insisting that he has no place in a post-war settlement.

Russia says Assad’s government should be the centerpiece of international efforts to fight militants.

The campaign is the first time Moscow has sent forces into combat beyond the frontiers of the former Soviet Union since the disastrous Afghanistan campaign of the 1980s, a bold move by Putin to extend Russia’s influence beyond its neighborhood.

It comes at a low point in Russia’s relations with the West, a year after the United States and EU imposed financial sanctions on Moscow for annexing territory from Ukraine.

Assad and his father before him were Moscow’s close allies in the Middle East since the Cold War, and Russia maintains its only Mediterranean naval base on the Syrian coast.

Moscow’s intervention comes at a time when insurgents had been scoring major battlefield gains against government forces after years of stalemate in the war.

Putin appears to be betting that by defending Assad he can increase Russia’s influence in any post-war settlement, safeguard the naval base and counter the influence of regional rivals like NATO member Turkey. He may also intend to reinforce his image at home as a strong leader willing to challenge global rivals, first and foremost the United States.