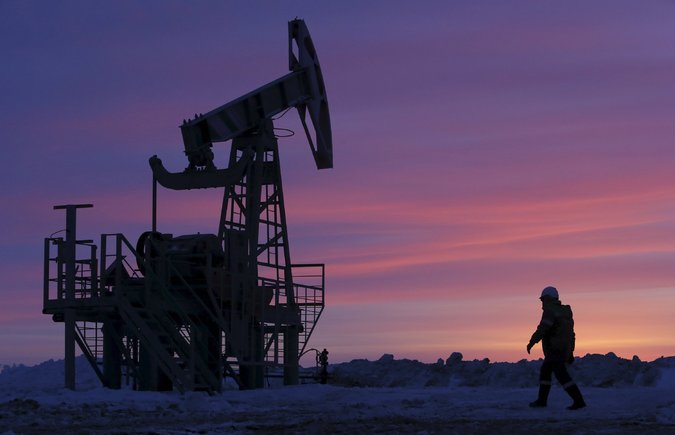 Russia, Light on Cash, Weighs Risks of a Heavy Tax on Oil Giants

MOSCOW — As the gusher of oil money that underpinned the rise of President Vladimir V. Putin has dwindled in the price slump, the Kremlin has found ways to keep the economy chugging along, albeit at a reduced rate, spending down rainy day funds and cutting wages and pensions.

But the budget strains are worsening as the price decline grinds along, forcing the Kremlin to look for new sources of money — freezing pensions, withholding wages, raising some taxes, selling off chunks of state-owned companies, even reportedly trimming military outlays.

Things have become so tight, insiders say, that the Kremlin is considering cracking open the one piggy bank that was always considered sacrosanct, one that carries long-term consequences for the Russian economy: taxing the funds that oil companies need to invest to ensure future oil production.

That move would be the oil industry equivalent of eating the seed corn. The longer the government keeps extracting cash from the crucial oil sector, the greater the damage to the country’s future economic prospects, even if oil prices rebound.

“The situation is very serious,” Mikhail I. Krutikhin, an energy analyst at the consultancy RusEnergy, said in a telephone interview. He estimates thatRussia’s oil production, now at a post-Soviet record high of 10.8 million barrels a day, will peak at some point next year and begin a long-term decline.

“The only question is the slant of this line,” he said. “The oil companies are not investing at all in exploration of new deposits because profits on these projects will only come in 10 years. Nobody will invest in these projects.”

This year, new taxes will cost oil companies about 200 billion rubles, or about $2.9 billion. But a far larger tax, reported by Russian news media to be up to $11 billion, is under consideration for the 2017 budget.

There is little doubt that Russia needs the money now, and that the oil companies provide an enticing target. Because they are paid in dollars but conduct their domestic business in the battered ruble, Russia’s oil majors have lots of cash. While globally most oil companies are deep in the red, cash reserves industrywide in Russia remain at an estimated $90 billion, a deep and tempting pool for the strapped Kremlin.

But Mr. Putin, who personally oversees the energy industries, knows the dangers of taxing the companies too heavily and has long resisted the temptation. “Putin faces a dilemma,” Mr. Krutikhin said.

The dilemma stems from the structure of Russia’s oil tax system, which was designed for the state to capture the windfall of profits from high prices of oil and other commodities, rather than leaving them for the country’s oligarchs.

The higher the price, the more Russia’s oil companies are paid in taxes. At an oil price of $100 a barrel, for example, the companies were paying taxes of $74, according to Renaissance, a Moscow investment bank. When oil prices collapsed, the government took most of the loss in diminished tax receipts. With oil at $35 a barrel, the tax is about $17, leaving $18 a barrel for the companies — not too much less than the $30 a barrel they made at the peak.

The average cost of producing and transporting a barrel of oil is about $15. Adding a tax of $17 a barrel, when oil is selling for $35, leaves a profit of only $3, a margin that rapidly shrinks as the tax rises, leaving little or nothing to show for an investment.

The quandary for the Kremlin is made worse by geology because oil deposits discovered and developed in Soviet times are nearing depletion. The country’s oil future, like that of the United States, lies in offshore and shale projects that are more expensive to develop.

Given oil’s outsize role in Russia’s economy, it is no surprise that a fierce fight has erupted over tax policies. The powerful industry and its allies in the Ministry of Energy are resisting tax increases, while equally powerful factions in government want to raise taxes to maintain spending at current levels, not least on the military.

A study leaked from the Ministry of Energy, seen as allied with the oil industry, and published last week in the business daily Vedomosti, presented a doomsday scenario. Russia, the analysis predicted, could cease to be an oil power, with output plummeting to half the current level by 2035.

The Ministry of Finance, in contrast, has pressed for new taxes on the oil industry as Russia prepares a revised budget for 2016, which is due in June. Vladimir Tikhomirov, chief economist at BCS Financial Group in Moscow, said the government was striving to keep the deficit within the legally required limit of 3 percent of gross domestic product.

The ministry is considering foreign borrowing and privatizing shares in public companies, including in the national oil company, Rosneft, as an alternative to defense cuts or energy industry tax increases.

Even while piling up cash reserves, however, oil companies’ investment rose at a rate of 11 percent, which was lower than inflation of 12.9 percent, last year. “The response from oil companies has been they will have to cut further into investment programs; otherwise, they will not be able to bring their books into balance,” Mr. Tikhomirov said.

Russian companies have not broken ground on a major new field here since the Trebs and Titov, a complex of oil fields in northern Russia, was tapped in 2014 just as Western sanctions took effect and oil prices slumped.

Industry lobby groups have pushed back, so far as is possible in Russia’s tightly coiled political system.

It would not be the first time oil entered a spiral of declining volumes and rising demands from the state. Short of cash in an oil price downturn in the late Soviet period, the Kremlin squeezed the oil industry. It was deprived of capital, at the time, for such things as imported machines.

Output in what is today the Russian Federation fell to about 8.8 barrels in 1991 from about 11 million barrels a day in 1988, according to “Collapse of an Empire: Lessons for Modern Russia,” by a former prime minister, Yegor T. Gaidar, who argued that oil prices and not the arms race with the United States ended the Soviet Union.

A diminishing role for the oil industry is not so bad for Russia, politically or economically, Yevgeny G. Yasin, a former minister of economy, said in an interview. Russia should raise taxes on oil companies even if it diminishes the share of extractive industries in the economy in future years, and shift focus to other areas of Russian strength, such as education and science, he said. Instead, the revised budget proposes a 10 percent cut to nonmilitary outlays.

“The United States is successfully developing shale oil so that even if prices go up, it will only lead to more shale oil production” that would compete with new Russian output coming online years from now, Mr. Yasin said.

“If we want Russia to be a developed country, we should orient ourselves toward the innovation economy,” he added.

“The fat years are over.”

Russia, Light on Cash, Weighs Risks of a Heavy Tax on Oil Giants