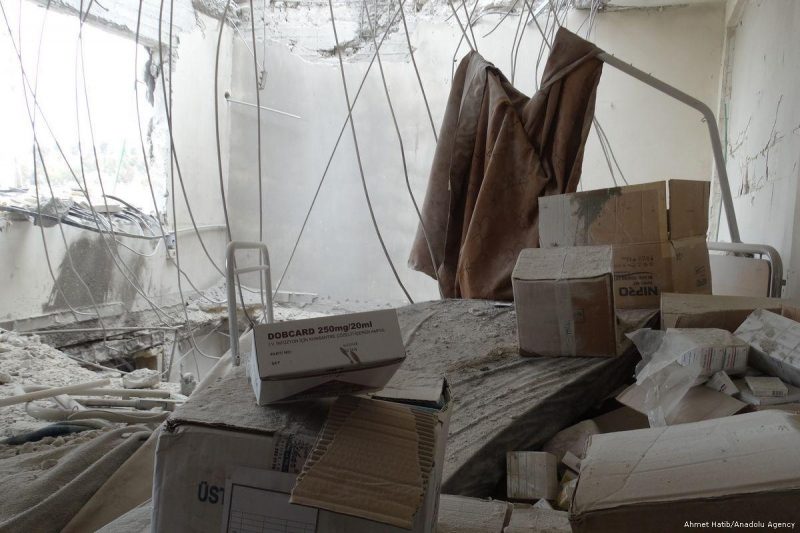 Russia bombed Idlib hospitals knocking them out of service. Not far behind are Assad helicopters dropping barrel bombs on civilians. Assad aims at cleansing the country of Syrians opposed to his regime to prevent future revolutions.

The latest fighting has killed dozens of people and has displaced tens of thousands in Idlib. Civilians fled to safer regions farther north. It’s the heaviest fighting in months, and has raised fears the government might launch a wider offensive soon.

Attacks on hospitals and clinics in the past have preceded major government offensives on rebel-held areas, including the 2016 attack on rebel-held parts of the northern city of Aleppo and last year’s offensive on eastern suburbs of the capital, Damascus.

By attacking hospitals before their use, Russia is practicing a “maximum kill” policy against the Syrian people; as well against the Islamists holed-up among them. Injured civilians end-up dying in large numbers as a result.

Syrian opposition sources reported that the Russian warplanes were behind the attack on the main hospital in the rebel-held village of Hass. The opposition-run activist collective Baladi News also reported the airstrike on the hospital, adding that it was not clear whether there were casualties.

However, rescue workers in the rebel-held area say dozens of people have been killed and thousands forced to flee by bombardments.

Since the early hours of Sunday, Russian warplanes carried out more than 50 airstrikes on Idlib and nearby Hama province. The Syrian opposition said government and Russia bombardment killed at least six people on Sunday in different rebel-held areas.

Meanwhile, Assad bombing resulted in artillery hitting a Turkish military position. Turkey has evacuated that position to protect its troops from further risk.

The upsurge in violence in Idlib and nearby areas in the last five days has strained a Russian-Turkish deal that has staved off a government offensive since September. The area is the last bastion of opposition to the brutal Assad regime.