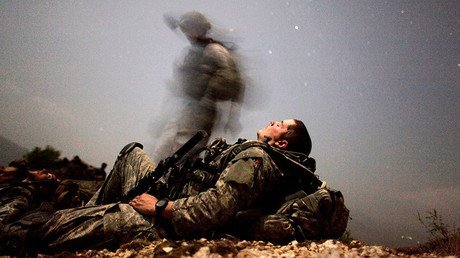 Russia is supporting and even supplying arms to the Taliban, the head of US forces in Afghanistan has told the BBC.

He said Russian weapons were smuggled across the Tajik border to the Taliban, but could not say in what quantity. Russia has denied such US allegations in the past, citing a lack of evidence.

But the new claims come at a sensitive time in Russia’s ties with Nato powers.

Britain and Russia are locked in a dispute over claims that Russia was behind an attack on a former Russian spy and his daughter on UK soil using a deadly nerve agent.

Meanwhile a US Congressional Intelligence Committee has just published a report concluding that Russian provocateurs meddled in the 2016 election.

“We see a narrative that’s being used that grossly exaggerates the number of Isis [Islamic State group] fighters here,” Gen Nicholson told BBC News. “This narrative then is used as a justification for the Russians to legitimize the actions of Taliban and provide some degree of support to the Taliban.”

“We’ve had stories written by the Taliban that have appeared in the media about financial support provided by the enemy. We’ve had weapons brought to this headquarters and given to us by Afghan leaders and said, this was given by the Russians to the Taliban,” he continued. “We know that the Russians are involved.”

Much of Gen Nicholson’s career has been spent in the conflict in Afghanistan. He narrowly escaped death when his office in the Pentagon was destroyed by one of the 9/11 planes and the US campaign in Afghanistan has shaped his career ever since.

He believes this direct Russian involvement with the Taliban is relatively new. He says Russia has conducted a series of exercises on the Afghan border with Tajikistan. “These are counter terrorism exercises,” says Gen Nicholson, “but we’ve seen the Russian patterns before: they bring in large amounts of equipment and then they leave some of it behind.”

The implication is that these weapons and other equipment are then smuggled across the border and supplied to the Taliban.

The general admits it is hard to quantify how much support Russia is actually giving the Taliban, but senior Afghan police officers and military figures have told the BBC that it includes night vision goggles, medium and heavy machine guns as well as small arms.

Afghan sources say these weapons are likely to have been used against Afghan forces and the Nato advisers who support them on some combat missions.

However, Russia is not an obvious ally of the Taliban. The Soviet Union fought a bitter war against the US-backed mujahedin after it invaded Afghanistan in 1979. Many of those same mujahedin fighters joined the Taliban when it was formed during the civil war that followed the humiliating Russian withdrawal in 1989.

The Taliban’s enmity towards Russia was enduring, says Kate Clark of the Afghanistan Analysts Network: “The Taliban always castigated the Northern Alliance for dealing with Russia,” she says.

It may be that now Russian and Taliban interests are becoming more closely aligned, she speculates.

President Trump has been pressuring Pakistan to sever its links with the Taliban. In January he suspended hundreds of millions of dollars of security aid after complaining on Twitter that Pakistan had “given us nothing but lies & deceit” and accusing it of providing “safe haven to the terrorists we hunt in Afghanistan”.

The Taliban is also keen to distance itself from Pakistan and demonstrate that it is an independent force. That makes finding new funding lines and international backers important.

Russia, meanwhile, denies providing weapons or funds to the Taliban but has admitted that it has had talks with the insurgent group. It justified that on the basis of the shared opposition to the Islamic State group, which has been trying to establish a base in the north-east of Afghanistan.

However Russia may well believe there are wider geo-political benefits to be had from supporting the Taliban.

When I asked Gen Nicholson whether he thought that Russia was fighting a proxy war against America in Afghanistan he didn’t address the question directly.

“This activity really picked up in the last 18 to 24 months,” he replied. “Prior to that we had not seen this kind of destabilising activity by Russia here. When you look at the timing it roughly correlates to when things started to heat up in Syria. So it’s interesting to note the timing of the whole thing.”