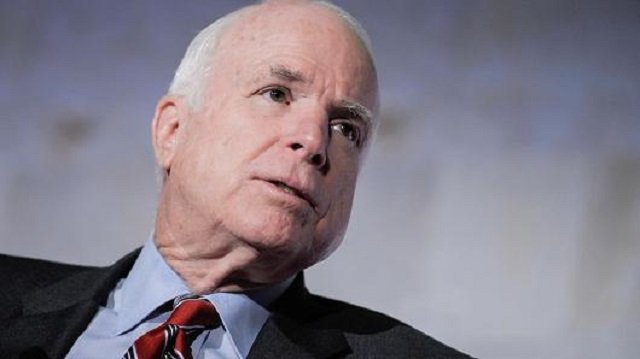 Russia is deliberately attacking civilians in northern Syria in an attempt to intensify the refugee crisis, western diplomats and politicians have warned, in a sign that a fragile ceasefire agreement for the war-ravaged country is crumbling before it begins.

A pivotal part of Russia’s strategy was “to exacerbate the refugee crisis and use it as a weapon to divide the transatlantic alliance and undermine the European project”, US Senator John McCain said in a speech at an annual security conference in Munich on Sunday.

Moscow was “weaponizing” the refugee crisis for leverage, one of the politicians warned. According to a European official, facilities such as bakeries and hospitals were being hit in an attempt to force the local population into capitulation and increase the flow of refugees towards Turkey and Europe.

The Syrian ceasefire deal, which is set to begin on Friday, was agreed by the International Syria Support Group — the collection of regional and world powers whose influence is critical in determining the outcome of the Syrian conflict — on the eve of the conference last Friday.

Moscow’s air operations have shifted the balance of power in favour of the regime of Bashar al-Assad, leaving many Washington-backed moderate opposition groups in northern Syria close to surrendering.

“This is diplomacy in service of military aggression, and it’s working because we are letting it,” said Mr McCain.

“It is no accident that Mr Putin has agreed on a cessation of activities when he did. We have seen this movie before in Ukraine,” he added.

Mr McCain, chairman of the US Senate armed services committee, gave public voice to widespread concerns over the ISSG deal that have been simmering among some of Washington’s closest allies. Though the agreement has been cautiously welcomed in public, in private most do not think it will succeed.

The Russian bombing of Aleppo — Syria’s largest city, which is now almost completely encircled by Mr Assad’s ground forces — has continued over the course of the weekend, in spite of the ISSG pledge to begin an immediate rollback of military activities. The attacks are rapidly worsening the plight of civilians in the city, according to local observers and humanitarian agencies.

The International Rescue Committee said more than 40,000 had fled the countryside of northern Aleppo province in the past two weeks, crowding into towns near the Turkish border.

Last week, Russian and regime forces targeted and destroyed both of Aleppo’s main hospitals, according to Colonel Steve Warren, military spokesperson for the US anti-Isis mission. “Over 50,000 Syrians are now without any access to life-saving assistance,” he said.

On Sunday there were 18 strikes on and around the town of Tel Rafaat in the countryside north of Aleppo. “They are razing the cities. In the last week, there were on average 40 strikes on Tel Rafaat every day,” said an employee in Aleppo with the Syrian Civil Defence Force, an emergency rescue group inside the country.

The growing refugee crisis facing Europe will dominate discussions at an EU summit due to be held on Thursday. German chancellor Angela Merkel is under particular pressure to strike an arrangement with Turkey to accommodate a greater number of Syrians in the bloc — a move fiercely resisted by many other member states.

Manuel Valls, prime minister of France, Germany’s most important EU partner, on Sunday spoke out against Ms Merkel’s plans for a redistribution of refugees around the union, saying that Germany’s open-door policy on refugees was “unsustainable in the long run”.

Mr McCain’s speech stood in stark contrast to that of Mr Kerry’s on Saturday. The secretary of state described the coming week as “a hinge point”.

“In some quarters there is pessimism in he air. I believe we have good reason, actually, to be optimistic about the future?.?.?.?This moment is not as overwhelming as people think it is,” he said. “We know what needs to be done, and most importantly, we have the power to do it.”