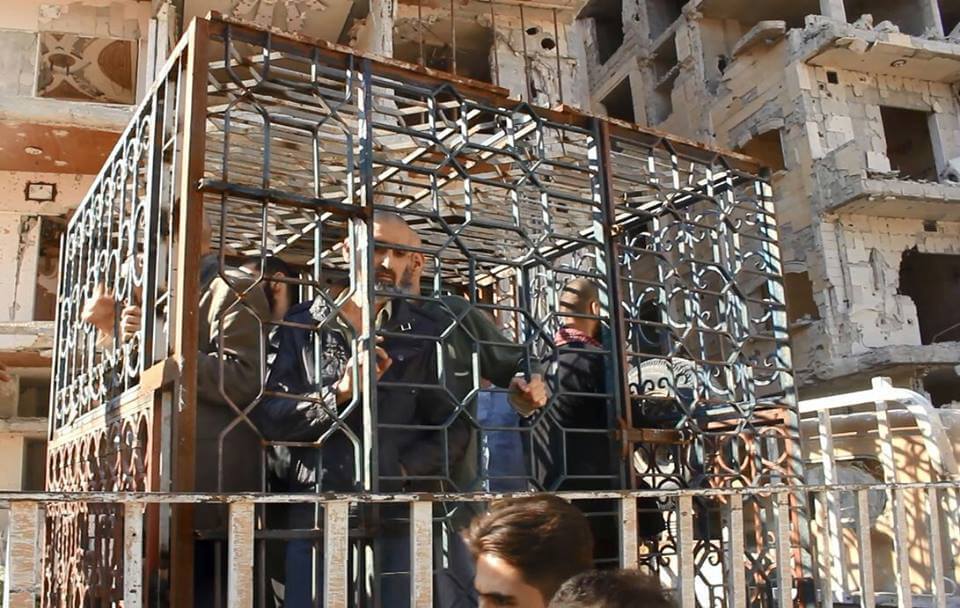 November 3, 2015 4:50 am 0
The Kurdish Cause vs. The Palestinian Cause
Russia blocks UN statement condemning Syria airstrikes
You Think Obama Did Not Know This Was Going to Happen?

Human Rights Watch has accused Syrian rebel groups outside Damascus of war crimes after they placed hostages including civilians in cages for use as “human shields” to deter government strikes.

Video posted over the weekend showed dozens of captives, among them soldiers and civilians, in cages being transported to different parts of the Eastern Ghouta region outside Damascus.

Human Rights Watch said the practice “constitutes hostage-taking and an outrage against their personal dignity, which are both war crimes.”

“Nothing can justify caging people and intentionally putting them in harm’s way, even if the purpose is to stop indiscriminate government attacks. Ending Syria’s downward spiral requires international backers of armed groups as well as the government to make protecting civilians a top priority.”

The rights group noted that a similar practice was reported in September, in two government-held Shiite towns under rebel siege in Idlib province.

There images emerged purporting to show captured rebels placed in a cage on a building in one of the villages to deter opposition shelling.

Eastern Ghouta is a rebel stronghold outside Damascus and a frequent target of heavy and bloody government air strikes and shelling.

At least 70 people were killed and 550 wounded in government attacks on Douma, in Eastern Ghouta, last week, according to non-governmental organization Doctors Without Borders.

Rebels in the region regularly bombard the capital, and rights groups have condemned both sides for their indiscriminate fire.

More than 250,000 people have been killed in Syria since the conflict began in March 2011 with anti-government protests.

All sides in the complex civil war have been accused of abuses of varying degrees, including the use of banned weapons, torture, arbitrary arrest and execution.