Relatives of Syria’s Minister of Defense Fight for IRGC

The Iranian Revolutionary Guards Corps (IRGC) is exploiting the Assad army composition to strengthen its influence and control through its support for militias fighting alongside the Assad army by purchasing loyalties within the system itself.

A leaked secret document from the Military Security branch of the Assad regime, which was obtained by a pro-rebel website al-Souria.net, revealed that the relatives of the Minister of Defense in the Assad regime, Fahd Freij, are soldiers working for the Iranian “Revolutionary Guards” to implement their agenda in Syria. In effect, relatives of Syria’s Minister of Defense fight for IRGC, not their country.

The document (See image below), dating back to the fourth month of last year, said that “El-Hajj Malik (Revolutionary Guards) visited the village Rihjan on March 29, 2014 and presented to the Freij family members special weapons consisting of modern sniper rifles, pistols, machine guns, and night vision devices, as well as providing them with substantial financial support.

The document shows that the “Revolutionary Guards” promised the relatives of the Minister of Defense significant support to recruit young people in the village of Rihjan and neighboring villages located in the vicinity of the IRGC Brigade 47 now stationed around the city of Hama. El-Hajj Malik also promised to dispatch three new tanks to the Rijhan village.

According to the same document, another IRGC officer named Haj Abu Khader has already visited the village mentioned three times in order to coordinate the recruitment of its young people to fight for the IRGC Brigade 47. The document cited an internal intelligence source saying that the “relatives of Minister of Defense Freij are raiding other Syrian security services to push their employees to volunteer, on supposedly temporary contracts, by abandoning their existing posts and joining the Brigade 47.”

In return for their service, the relatives of the Minister of Defense names would be removed from the lists of reservists or be called by the Syrian army to serve. Additionally, those relatives who have not been called for their obligatory military service can now serve instead in the Brigade 47 as an equivalency to their regular army service. The document indicated that they would receive a high salary serving in the Brigade 47 and be provided IRGC guarantees to protect them from any legal liabilities should they serve the Brigade 47 instead of their regular Syrian army.

The document asks the head of the Military Security branch to ascertain the validity of the accusations leveled against the IRGC with regard to its activities in the eastern countryside of Hama and other areas, pointing to the negative impact caused by the reluctance of volunteers to join the ranks of the Assad regime forces. The document also confirms that six elements working for the Syrian Air Force Intelligence have already joined the IRGC Brigade 47.

This document provides an insight into how weak the Assad regime is internally when the Minister of Defense himself courts a foreign country occupying its lands and helps it gain an advantage over the very same army he is supposed to lead. Imagine Secretary Carter pushing his son to serve in the Russian Army instead of the U.S. armed forces to fully grasp how Syria, as a country, is melting away. 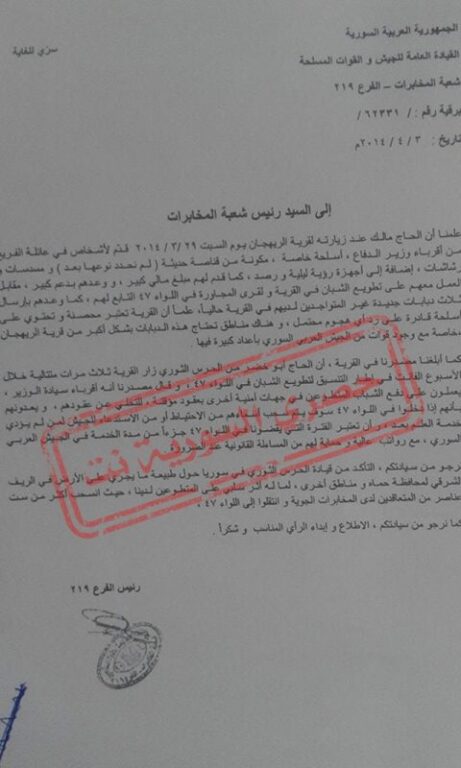 Relatives of Syria’s Minister of Defense Fight for IRGC