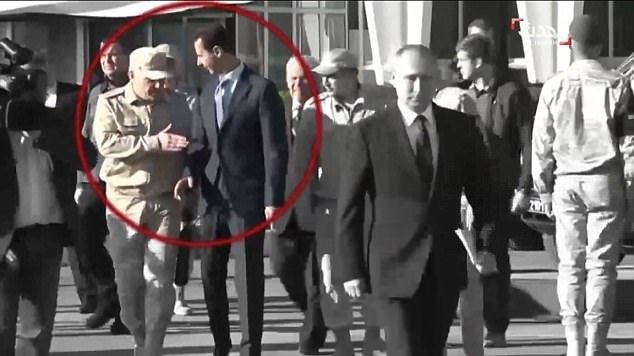 When a news camera captured footage of Putin’s security detail blocking Baschar al-Assad from sharing the stage with Vladimir Putin in declaring victory in Syria, Falafel had a secret weapon deployed at the time that amplified the sounds he heard behind the humiliating grab by one of Putin’s security soldiers. Falafel saw, for the first time, the real Syrian president step up to the podium to declare victory and the figurehead Syrian president getting a dose of his new reality.

Here is exactly what transpired between the security man and Baschar al-Assad during this moment when Assad realized he was a non entity in his own country.

Security man: Hold it there, where do you think you’re going?

Assad: I am the president of Syria

Security man: Back off buddy. This victory is not yours to claim.

Assad: But I’m the president of Syria!

Security man: Yes you are when the real Syrian president is not here.

Assad: But I’m the only president of Syria. Please, I need to be next to your boss or it’s the couch for me tonight.

Security man: I have orders to tackle you to the ground if necessary. Couch or ground?

The security man stands down after Assad slowed his pace and decided to stay behind while the real Syrian president Vladimir Putin claimed his victory.

The video and images showing Assad being humiliated on Syrian soil by a third-rate Russian soldier says much about who truly rules Syria today.

The butcher of Damascus, because of the security soldier, found out just how dispensable and how small he has become. Putin declared victory in Syria while Assad was kept hostage in the background.

This is why we believe Putin keeps Assad in power. His insignificance highlights the powers of Putin on the world stage.