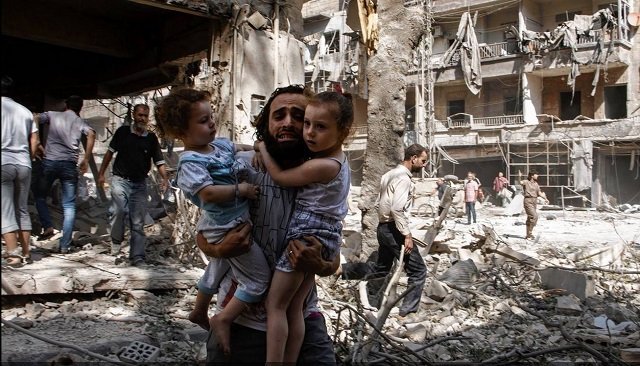 In response to Vladimir Putin’s illegal annexation of Crimea and intentional destabilization of a sovereign country, the EU imposed restrictive measures against Russia.

The sanctions have affected Europe negatively on two fronts. Its agribusiness has suffered nose-diving revenues it can no longer ignore, and Putin responded by shoring-up the Assad regime in Syria, which has opened the floodgates to Europe for Syrian refugees escaping the Assad terror.

Germany’s Chancellor Merkel responded to Putin’s challenge by announcing it intends to absorb a large number of refugees (800,000 according to the coalition government in Germany at a price tag of $6.6 Billion). Merkel, with this gesture, was sending Putin a message Europe will not be pressured by a thug.

Putin responded by providing Assad with more efficient weapons to accelerate the refugee exodus by terrorizing civilians.  The U.N., for its part, believes there will be one million more displaced Syrians within the country by the end of this year many of whom will begin heading westward towards safer shores in Europe.

Turkey, Lebanon, and Jordan have reached their capacity to shelter and feed any more Syrian refugees.

Vladimir Putin is exacerbating the Syrian conflict by using Assad as a tool for his evil schemes, which are inevitably killing more civilians and causing more miseries to people whose only sin is to be free from the Assad tyranny and terror. Meanwhile, Obama has other plans in mind called the State of Israel he believes unleashing Iran, and now Russia, in the region might accomplish for him. Obama is unwilling to pressure Putin out of Syria no matter the spin coming out of Washington.

How will Europe respond to Putin’s Syria gambit remains unclear. Europe can impose more economic sanctions on Russia that would destabilize the Russian economy. Taking the fight against Putin at home is the best response Europe can muster.  Russians live in a bubble, and it is time to burst it even at their expense.

It is time to begin the process of regime change in Russia proper. Europe might find more friends to support this goal than they think they previously had.