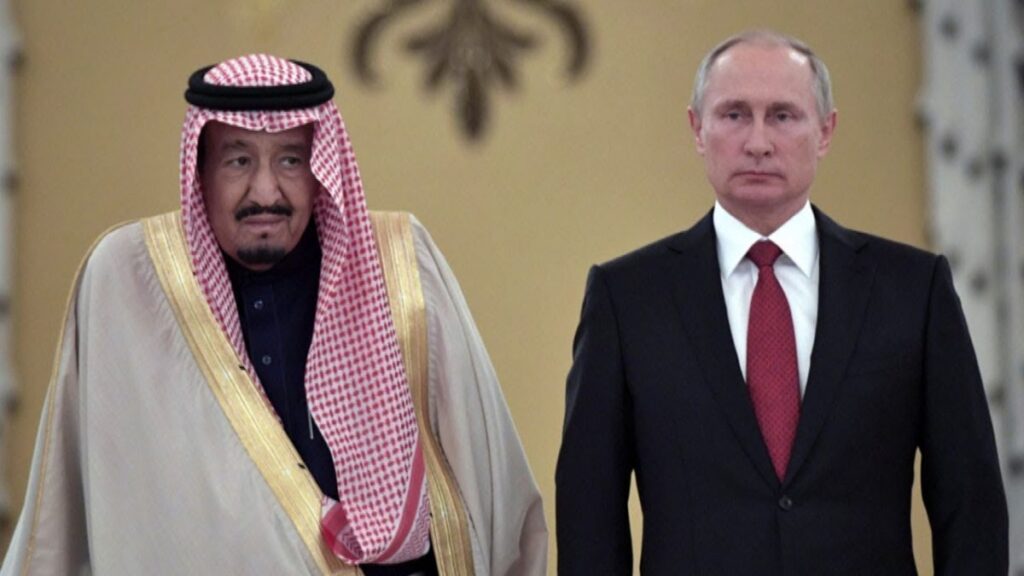 Russian President Vladimir Putin visits Saudi Arabia on Monday for the first time in over a decade. Putin seeks to capitalize on growing influence borne of military advances in Syria and strong ties with regional rivals.

Moscow accrued power in the Middle East in 2015 by sending troops to Syria. Both Russia and Iran have played a key role in protecting Assad as his people rejected his rule. Meanwhile, the United States pulled back.

On the eve of Putin’s trip, U.S. troops were evacuating northern Syria as their erstwhile Kurdish allies struck a deal with Assad’s Russian-backed army aimed at halting a Turkish offensive. It is possible Trump pulled US troops out of Syria to help Putin gain more clout. Indirectly while claiming a non-interventionist policy.

Russia has also strengthened ties with both Sunni Muslim Saudi Arabia and Shi’ite Iran. Both countries are seeking regional influence that veered towards open conflict after a recent spate of attacks on oil assets in the Gulf that Riyadh and Washington blame on Tehran.

Tensions with Iran, which is locked in several proxy wars with Saudi Arabia including in Syria, have risen to new highs after Washington signed an Iran Deal that empowered Iranian expansionism.

Putin, accompanied on the trip by his energy minister and head of Russia’s wealth fund, is due to hold talks with King Salman; as well as his pariah son Crown Prince Mohammad bin Salman. Putin claims to have good relations with MbS.

The strengthened ties have seen non-OPEC Russia, once regarded as a rival in oil markets, join OPEC kingpin Saudi Arabia in forming an alliance known as OPEC+ to support crude prices by restraining output.

Ahead of the visit, Putin, who offered to provide Russian defense systems to the kingdom after Sept. 14 attacks on its oil facilities, said he could also play a positive role in easing tensions with Tehran as he had good ties with both sides.

Any progress on long-mulled Saudi plans to purchase the Russian S-400 surface-to-air missile systems would cause disquiet in Washington. The U.S. is dispatching around 3,000 troops and additional air defense systems to the kingdom following last month’s Iranian attack.

Asked about concerns Riyadh was cozying up to Moscow, Saudi Minister of State for Foreign Affairs Adel al-Jubeir said:

Russian and Saudi flags lined the streets of Riyadh ahead of Putin’s one-day visit. Putin then travels to the United Arab Emirates.

In meetings with Saudi leaders, the Russian president will discuss the OPEC+ pact. Of late, the pact helped cut production by 1.2 million barrels per day since January.

A forum will convene 300 Saudi and Russian CEOs. The two sides may sign more than $2 billion of deals. It will include a joint investment by state oil giant Saudi Aramco and Russia’s RDIF sovereign wealth fund.

RUSSIA IS THE NEW WALL STREET

RDIF head Kirill Dmitriev said a number of Russian investors were interested in a planned initial public offering of Aramco, which could sell between 1% and 2% through a local listing as early as November ahead of a potential international offering. That should be a wake-up call to the pro-Trump Wall Street, which was aiming to assist Aramco.

Moscow, the world’s largest wheat exporter, made some progress in accessing the Saudi and Middle Eastern markets when the kingdom agreed in August to relax specifications for wheat imports, opening the door to Black Sea imports.