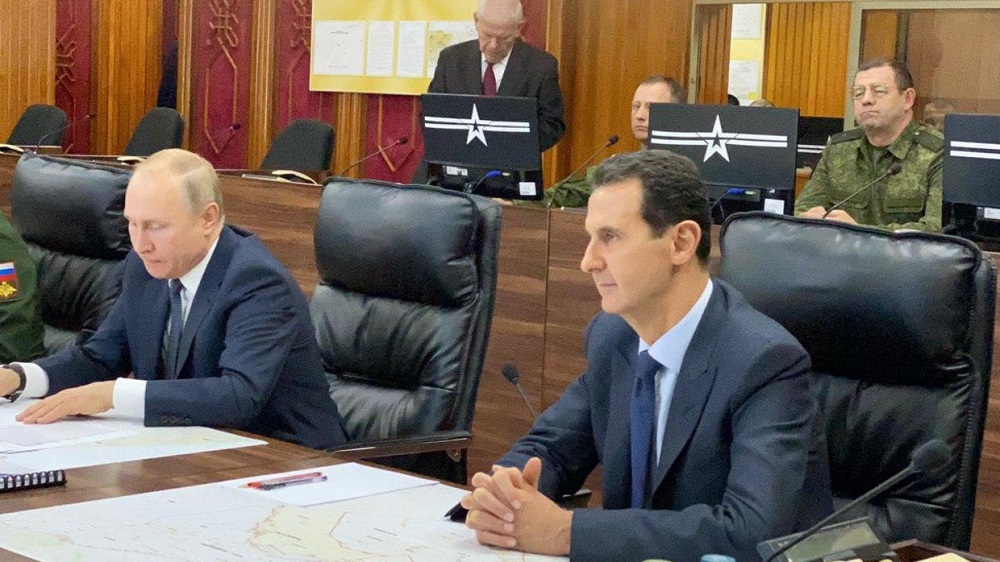 January 8, 2020 6:58 am 0
Two Downed Jets, Two Different Responses by Israel and Russia
What Did Donald Trump Do for Syria?
The Mother of All Political Stalemates

Vladimir Putin met Bashar al-Assad in Damascus on Tuesday, the Russian leader’s second trip to Syria since Moscow intervened decisively on the Syrian president’s behalf in the country’s civil war. Is it a coincidence that Putin meets Assad after the death of Soleimani?

PUTIN SHORING BOTH SYRIA AND IRAN UP

The visit comes at a time of heightened regional tension. Assad’s other main military ally, Iran, has said it will retaliate against the United States for the killing of Qassem  Soleimani in a drone strike.

General Soleimani, who was one of the key figures in Syria’s war as the architect of Iranian military operations in the Middle East, had just arrived in Iraq from Syria when the U.S. killed him with a drone on Friday at Baghdad airport.

Russian and Iranian support has helped Assad regain control of some parts of Syria even though Assad has yet to win the war against his own people tired of living under his brutal and barbaric regime..

Syrian state news agency SANA showed a photograph of Putin smiling as he shook Assad’s hand. It said they had listened to a military presentation by the head of Russian forces in Syria.

SANA reported that Putin and Assad discussed recent developments in the region; as well as plans to “eliminate terrorism” in the Idlib region, one of the last pieces of Syrian territory held by anti-Assad insurgents. There was no mention of eliminting Assad terror against Syrians.

Putin also delivered greetings to Russian forces in Syria on the occasion of the Orthodox Church celebrating Christmas.

Accompanied by Assad, Putin visited the Old City of Damascus including, the 8th century Umayyad mosque and an ancient church.

PUTIN MEETS ASSAD AFTER THE DEATH OF SOLEIMANI

I think Putin is there to reinforce the Russian position in Syria and with the person of Syrian … Bashar al-Assad, especially as Iran’s position has been indelibly weakened, since Soleimani was essentially Iran in Syria.

Though Iran and Russia worked together to beat back the anti-Assad insurgency, tensions have occasionally surfaced between them on the ground. Analysts believe they have been vying for influence.

Putin is due to hold talks on Wednesday with President Tayyip Erdogan in Turkey. Erdogan has sent forces into much of northern Syria to beat back Kurdish-led forces that had been backed by the United States.

Putin’s previous trip to Syria was in 2017, when he visited Russia’s Hmeyhim air base.

Putin told Assad that much had been done to restore Syrian statehood. Chemical Assad thanked Putin for his assistance in restoring his brutal rule in Syria. Putin will visit several facilities in Syria during the trip.

Soleimani, the Iranian general killed last week, had played a critical role in supervising Iran-backed ground forces to support the Syrian government during the war. He coordinated with Moscow ahead of its intervention in 2015.

Syrians blame Soleimani for much of the tactics Assad used to suppress the Syrian Revolution. Mainly, the rape, the torture, and the ethnic cleansing that forced 6 million Syrians to seek refuge in neighboring countries.