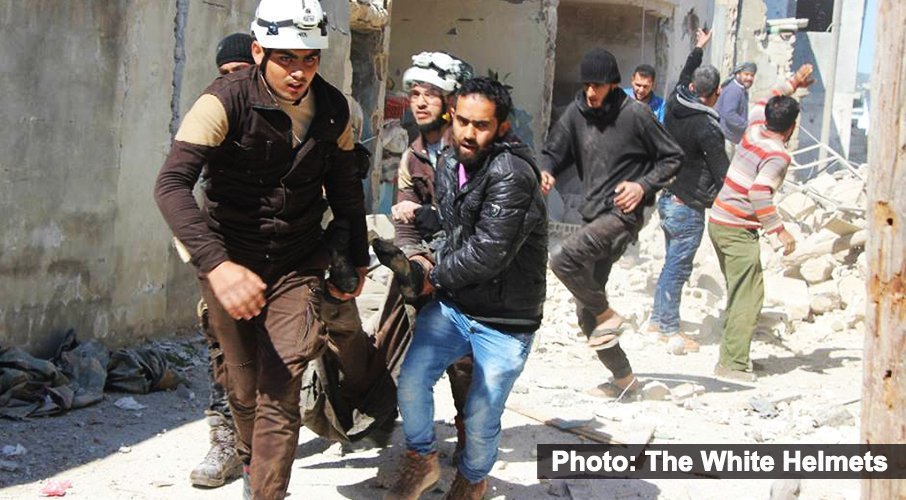 Russia has announced major military drills in the Mediterranean Sea amid growing tensions over a rebel-held enclave in Syria. The area is also home to 3 million civilians. Putin escalating Idlib civilian attack because Donald Trump is Commander-in-Chief. Trump would certainly turn a blind eye to chemical Assad horrific crimes against the innocent civilians caught in Idlib. To include striking children’s hospitals.

In June of this year, a wave of air strikes on rebel-held Idlib killed at least 10 children. The strikes hit the al-Nour Women and Children’s hospital.

The Defense Ministry told Russian news agencies on Thursday that Russia will deploy 25 ships, including a missile cruiser, and 30 jets for the maneuvers in the first week of September. The military says the drills will focus on anti-air and anti-submarine defense.

It says Moscow has notified international organizations of the drills, which may make it dangerous for aircraft and ships to operate in the area. Putin escalating Idlib attack because our Commander-in-Chief will ignore any use of chemical weapons or strikes against hospitals by his friend Vladimir Putin.

Russia announced the drills after NATO reported a Russian naval buildup in the Mediterranean.

Liquidating Militants and Civilians Too

Russian Foreign Minister Sergei Lavrov on Wednesday described militants in Syria’s last big rebel-held enclave of Idlib as a “festering abscess” that needed to be liquidated. Along the way, so will Putin liquidate thousands of civilians he knows Trump will not object to their mass deaths.

This is the last hotbed of terrorists who are trying to speculate on the region’s status as a de-escalation zone, who are trying to hold the civilian population hostage as human shields and bend to their will those armed groups ready to engage in dialogue with the government… So from all points of view, this festering abscess needs to be liquidated.

Lavrov told reporters that there was a political understanding between Turkey and Russia on the need to distinguish between the Syrian opposition and people he described as terrorists in Idlib Province. Ergo, save the Muslim Brotherhood.

The government of chemical Assad says it aims to recapture Idlib. The province has become a refuge for civilians and rebels displaced from other areas of Syria.

A wave of air strikes hit the region this month in a possible prelude to a full-scale government offensive. Assad struck a children hospital full of injured during these attacks.