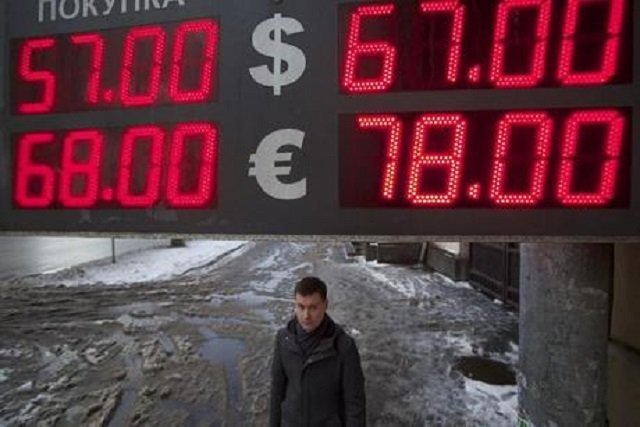 Russian stock markets and the ruble fell further on Monday as the currency edged closer to a historic low on the back of a fresh slump in oil prices. While Putin empowers a psychopath dictator in Syria, Russian economy falters and withers.

The ruble dropped at the start of trading to 78.85 to the dollar, nearing its record of just over 80 that it hit when the currency tumbled dramatically in December 2014.

Russia’s dollar-denominated RTS index fell by some 2.96 percent in early trading by around 07:20 GMT, meaning that it has shed some 16 percent since the start of the year.

Russia — whose energy-reliant economy has already been pushed into recession by low oil prices and Western sanctions over Ukraine — has been rocked again by a further slump in prices.

A barrel of Brent crude dropped briefly below 28 dollars on fears of oversupply after the international sanctions on Iran over its nuclear program were lifted.

Analysts at Russia’s VTB bank said in a statement:

“Oil is a key driving force at the moment, and if its slide continues, the FX market will continue adjusting.”

Russia relies on oil and gas for over half of its budget revenues and the fresh slump in prices has already seen the government target major spending cuts as it seeks to rein in a potential deficit.

Putin is a spy by training, and spies do not make good economists by nature. As the spy plays in his field of comfort, which is to shore-up the Assad regime in Syria, the economy is faltering because he insists on Assad remaining in power. For the oil prices to go up, Saudi Arabia has to produce less oil, which is willing to do if Putin quits on the psychopath Assad.

Is Assad worth the whole Russian economy? The spy Putin thinks so because his brain is wired to cuddle with dictators and not to cuddle with numbers.