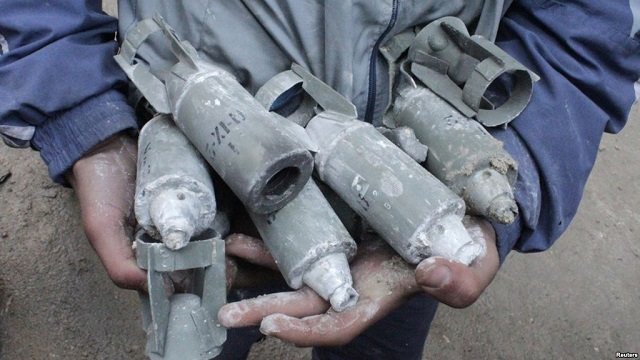 The Syrian opposition warned on Sunday that attacks by the army, backed by Russian warplanes, threatened a U.S.-Russian deal for a cessation of hostilities with collapse and endangered future peace talks.

The agreement, which is in its second day and has drastically curbed violence but not stopped it entirely, is the first of its kind to be attempted in four years.

In a letter to U.N. Secretary-General Ban Ki-moon, the opposition said violations would undermine international efforts to guarantee the continuation of the truce and lead to the collapse of the UN-adopted political process.

The head of the Russian coordination center in Syria, Sergei Kuralenko, said the plan was holding “in general” but said there had been nine violations of the truce in the past 24 hours.

Insurgents said war planes struck at least six towns and villages in west and north Aleppo and a village in the central Hama province. Putin drops Cluster bombs on civilians.

Warplanes believed to be Russian pounded the town of Teir Maalah, just north of the city of Homs, in the second round of bombing within a few hours of the strategic town that the army has tried to capture in the past to enter rebel held northern countryside of Homs province, insurgents said.

Rebels said the attacks across Syria were more intense than Saturday but still not as bad as those before the cessation of hostilities took effect.

“We are awaiting the response of states to these violations, the situation is in the balance now and self restraint will not last long,” colonel Fares al Bayoush told Reuters.

The Saudi-backed opposition group had earlier accused Russia of carrying out the strikes and said it would complain to the United Nations and countries backing the peace process but said it remained committed to the truce.

“The decision is to remain quiet, not to do anything, and I believe they will stick to the truce,” said Syria’s opposition spokesman Salim al-Muslat. “Yesterday was the first day people can really go out and walk in the streets.”

Speaking during a joint news conference with visiting Danish Foreign Minister Kristian Jensen in Riyadh, he said there would be a “plan B” if it became clear that the Syrian government and its allies were not serious about the truce. He gave no details.