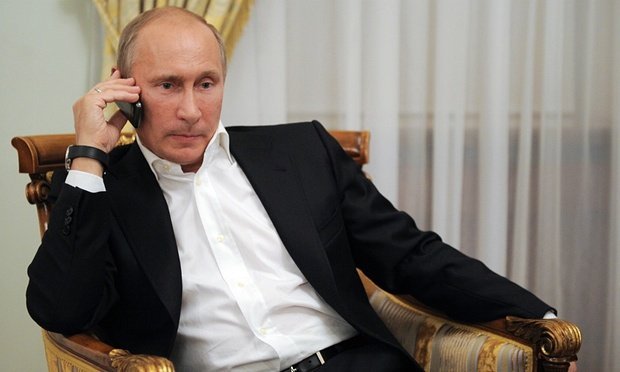 Putin Called Salman. What Do You Think They Discussed?

Russian President Vladimir Putin spoke to Saudi Arabia’s King Salman about finding a solution to the Syria crisis on Saturday, just two days before he is due to address the U.N. on the issue, the Kremlin said.

Putin called Salman. What do you think they discussed?

Naturally, both cited common diplomatic goals such as “The two men exchanged views on regional security matters, first and foremost, in the context of finding ways to settle the conflict in Syria”. Or “They also discussed building more effective international cooperation in the fight against the so-called Islamic State and other terrorist groups.”

Diplomacy aside, when Putin called Salman, what did they really discuss? Here is how we think the conversation went.

Putin: “Salmie, how you doing buddy?”

Salman: “Never call me Salmie, my son told you before”

Putin: “I am going to make meat soup out of your Jihadists in Syria, so why don’t you pull them out while you have the chance”

Salman: “Oh, ya. Watch for the surprise we have in store for your troops. We are going to drown Russia with the tears of their mothers”

Putin: “I am looking here at the new map of the Middle East. Gee, I don’t see Saudi Arabia on that map. Pouf, it disappeared”

Salman: “Hey, RasPutin, there is not enough wood in Russia to manufacture the coffins you’re gonna need for your troops.”

Putin: “You believe America is going to save your butt this time around? Watch how stronger ISIS is going to get. and then I am sending them all to … Arabistan. Like the new name for the desolate piece of sh**t land you called after your family name?”

Putin: “Listen to my U.N. speech on Monday Salmie baby. Something will be there for you.”

Putin called Salman. What do you think they discussed? Surely not what our imagination permits us in this satirical article. But then, there is no love lost between those two men who find themselves opposing each other on the battlefields of Syria.

Putin Called Salman. What Do You Think They Discussed?