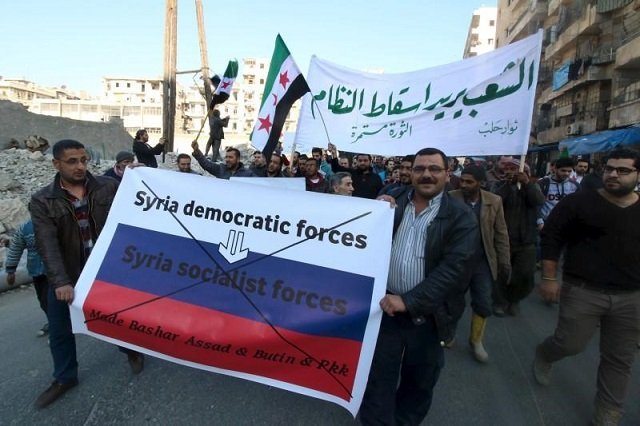 A senior official from Syria’s main opposition group said on Monday that a fragile international attempt to halt nearly five years of fighting was in danger of total collapse because of attacks by government forces. The psychopath Assad is wrecking truce deal.

The cessation of hostilities drawn up by Washington and Moscow faced “complete nullification” because Syrian government attacks were violating the agreement, the official of the Saudi-backed opposition High Negotiations Committee (HNC) said.

France said there were reports of attacks on opposition forces in breach of the deal, which came into force on Saturday, and countries backing the Syrian peace process met to try to clarify the situation.

U.N. Secretary-General Ban Ki-moon said the pause in the fighting was largely holding, despite some incidents that he hoped would be contained. The Kremlin said the process was under way, although it had always been clear it would not be easy.

In Washington, the White House said the United States remained committed to implementing the cessation of hostilities despite reports of violations over the weekend.

The cessation deal does not include jihadist groups such as Islamic State and the al Qaeda-linked Nusra Front, however, and Russia, which is backing the Syrian government with air power, has made clear it intends to keep bombing these groups.

An aide to Saudi Arabia’s defense minister said on Monday, meanwhile, that defense ministers from the U.S.-led coalition against Islamic State had discussed the possibility of a Syrian ground incursion two weeks ago in Brussels.

“It was discussed at the political level but it wasn’t discussed as a military mission,” Saudi Brigadier General Ahmed Asseri told Reuters. “Once this is organized, and decided how many troops and how they will go and where they will go, we will participate in that.”

The cessation of hostilities agreement, the first of its kind since the Syrian civil war began in 2011, is a less formal arrangement than a ceasefire. It is meant to allow peace talks to resume and aid to reach besieged communities.