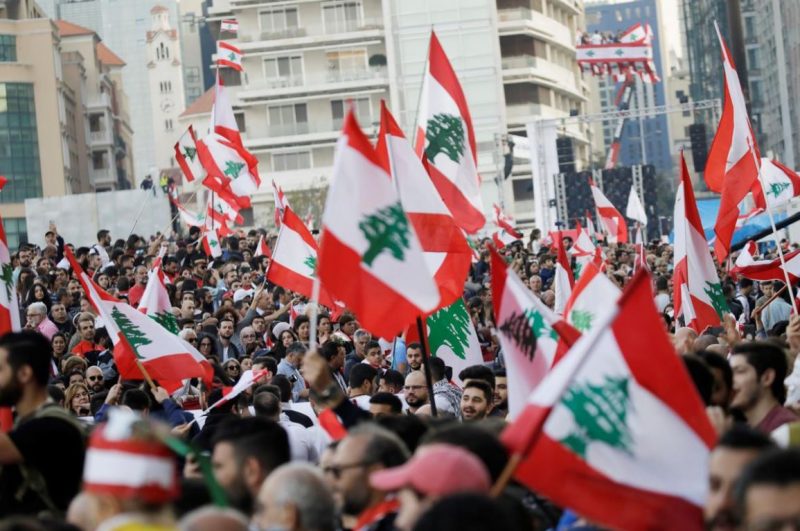 November 23, 2019 5:38 am 0
Hezbollah Open Treason Against Lebanon
The Lebanese Are In Disbelief Over The UN Hariri Verdict
Hezbollah Thugs Attacked Peaceful Demonstrators in Central Beirut

Tens of thousands of protesters took to the streets in Lebanon on Friday to mark independence day with a fresh wave of demonstrations against a ruling elite accused of rampant corruption and steering the country into deep crisis. Even though the protesters celebrate Independence Day to mark the end of the French Mandate, on the streets, however, the protesters were chatting up independence from corrupt politicians.

The unprecedented wave of nationwide protests erupted five weeks ago, leading to the resignation of Prime Minister Saad al-Hariri on Oct. 29. Despite a worsening economic crisis, deeply divided politicians have yet to agree on a new government.

Protesters waving Lebanese flags packed central Beirut’s Martyrs Square where music blasted into the night. Many protesters said they felt like they were celebrating independence for the first time.

A protester who gave her name as Hind said:

This year independence day is different. Before, they marred it with their system of sharing power and corruption. Today, we are demanding a clean independence and a country where we can live in dignity and pride.

Another protester Lydia, who is 21, said:

It’s important to show up today of all days and be united as a country. Everyone is realizing what true independence looks like.

The Lebanese government usually held the military parade on the seafront near Martyrs Square. This year, it relocated to the defense ministry where Hariri, still serving as prime minister in a caretaker capacity since his resignation, attended a low-key ceremony with President Michel Aoun and Parliament Speaker Nabih Berri.

THE MOST CORRUPT POLITICIANS

Michel Aoun and Nabih Berri are two politicians the protesters want ousted for their corruption. Hezbollah backs both men.

Hariri, who is aligned with Western and Gulf Arab states, is at odds with Aoun, Berri and the powerful Shi’ite group Hezbollah over the make-up of the next government. Broadcaster al-Jadeed noted an “unusual” silence between Hariri and Berri while other members of the government chatted to each other.

Lebanon is facing its worst economic crisis since the 1975-90 civil war; mostly rooted in years of state corruption and waste. The crisis has spread to the financial system where the pegged Lebanese pound has weakened, dollars have become scarce and banks have imposed controls to prevent capital flight.