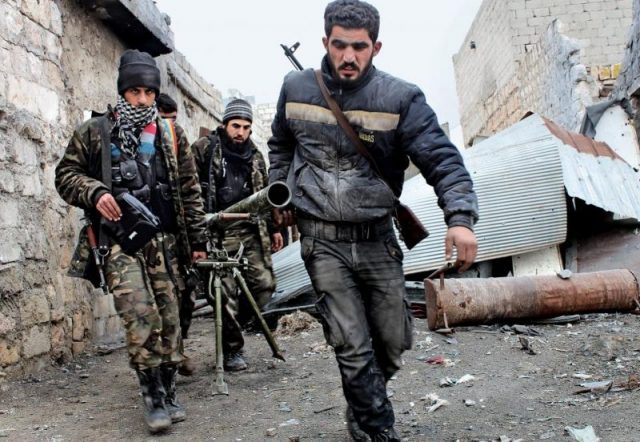 The militants Jihadists are pouring into Syria from every corner of Europe and the Arab world. They boast Lebanese, Jordanian, Saudi, Iraqi, Palestinian, Egyptian, and Libyan identities. Some cross into Syria because it is a religious duty, but many cross because they are fighting a proxy war on behalf of their funders. Privately funded Arab armies are exacting revenge against Assad.

There is no one figure or one family that conjures the image of revenge as does the Assad family. Under its belt are years of terror, death, summary executions, car bombings, assassinations, extortion, and torture of so many Arabs from so many different countries to include highly regarded politicians and their families. If you really add the tally, Assad has killed, or caused the killings of tens of thousands, possibly hundreds of thousands, of Syrians, Palestinians, Jordanians, Iraqis, Lebanese, Americans, Israelis, Saudis, Yemenis, Egyptians, and Libyans.

As a result, some in the Arab world today have decided to aid the Syrian rebellion against Assad. They are doing so by dispatching privately funded Arab armies to exact revenge against the Assad curse. These quickly formed militia armies without leaving any trace behind. These militants do not include those Qatar and Saudi Arabia have funded after a nod from the US State Department. They are private armies funded by unknown Arab figures to exact revenge on Assad and his entourage.

Finally, they get their chance to make Assad pay for his barbarity. This is their justice dispensed discreetly. They are bypassing the world apathy to deal with Assad directly.

With Assad being under so much pressure, they are not about to let him get away with murder again. They all suffered too much not to even consider sending Assad to the same hell he has been administering against the region for 12 years now and before him his father for 30 years.

Those involved in organizing, planning, and funding these militant expeditions into Syria are well known politicians, Sheikhs, and Emirs who have grown tired of being the subject of pressure, extortion, or outright murder by either Assad, the Iranian regime, or Hezbollah.

Very few people know this fact and no one ever discusses it in any public forum; many western governments have mostly ignored it. Arming Jabhat al-Nusra has been the exception. Turning a blind eye to these privately funded Arab armies serves the interests of everyone to see Assad weakened and removed from power.

When the US did not interfere, Assad believed he could pull this off and survive. This is when the chickens came home to roost. Having learned from Assad and Iran, who dispatched their own proxy militant terror against Iraq, these Arab leaders started planning and organizing their own militants now pouring into Syria in greater and greater numbers as their training, arming, and funding accelerate.

The sheer number of those willing to risk their lives fighting Assad is superior to any effort any country can lend to his rule. That is why Russia is beginning to see the lights dimming on Assad.

Furthermore, it is why it is a question of time before the civil war in Syria, partially fought by courageous Syrians in pursuit of freedom and partially fought by proxy Arabs, yields a final winner in the Syrian people over ruins that will be added to the Assad’s legacy as his crowning achievement.