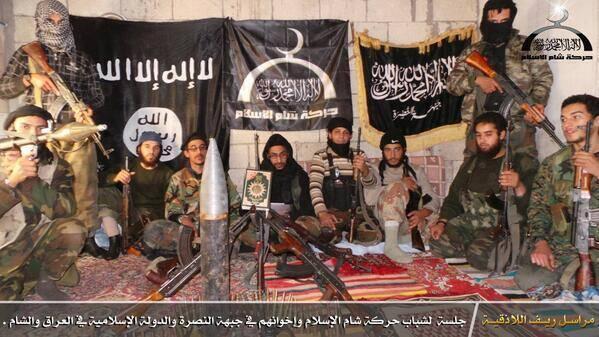 President Obama You Break It, You Own It

March 10, 2013 8:49 am 0
When Will Helpless Syrian Civilians Earn a “Never Again”?
INTERPOL Becoming Extension of Rogue Regimes
The Threat Trump Must Tweet To Protect Hormuz

Jabhat al-Nusra (JAN), an ever expanding fighting battalion funded by Wahabi extremists, has been waging a fierce battle against the Assad regime; its very existence fills a large gap the West chose to ignore at a time when the Assad forces were committing the most inhuman of atrocities against the civilian population. President Obama you break it, you own it.

Had Obama decided to assist meaningfully the more liberal elements of the Free Syrian Army that were defecting rapidly, everyone today would be discussing the Syrian civil war using past sentences.

Because of Obama’s White House policy on Syria, America broke its promise to help people in distress free themselves from the shackles of extreme violence and help other countries free themselves from the terror of Iran and its proxies. Therefore, America will have to own the results of its timidity. It is not a choice when the US disinherits its responsibilities, especially after a sworn enemy that attacked the US savagely in 2001 is the one fulfilling those responsibilities.

We learn today that Jabhat al-Nusra has announced it is setting-up Islamic Councils in the Eastern Provinces of Raqqah, Deir el-Zoor, and Hassaka. The Islamist organization will govern to facilitate services, manage legal disputes, and run emergency services. The first Islamist government ever to take root in Syria.

When was the last time a legitimate government uprooted an Islamist rule of law entirely? The only time was after 9/11 when the US mobilized tremendous resources to defeat the Taliban in Afghanistan. The Russians entered Afghanistan and Chechnya only to leave with their tails between their legs and America is leaving Afghanistan permanently by 2014 after a rocky 13 years of war whose success is disputable.

General Petraeus, who was head of US Central Command, announced, before leaving his command, that he was gravely concerned about the re-emergence of Taliban in Afghanistan.

Unlike the Taliban, Jabhat al-Nusra’s future is much brighter. The Syrian people perceive JAN as a savior rather than an enforcer because the battalion won every battle waged against the Assad far superior forces. Any future drone attacks on JAN will bring the wrath of 100 million Arab Muslims against the US. If Obama wanted to plant and nurture Islamic extremism, Syria would go in the annals of history as the best plan ever concocted for that purpose.

President Obama you break it, you own it.

Assad may have broken Syria but the world watched without lifting a meaningful finger to stop the carnage or to provide humanitarian aid (The US State Department aid of $385m to Syria went largely to organizations Assad controls), which resulted in Islamists to own Syria. Because of Syria, one day Americans will realize that bright ideological minds in control of policy are far worse than average pragmatic minds.

Antique shoppers know that when you enter an antique store and you break something, you own it. Assad broke Syria but the US will have to own Syria after an Islamist State emerges to threaten Lebanon, Israel, Jordan, and Iraq.

By then, Obama would be spending his time on a Golf course enjoying retirement, leaving behind a legacy of mounting problems domestically and internationally.

President Obama You Break It, You Own It