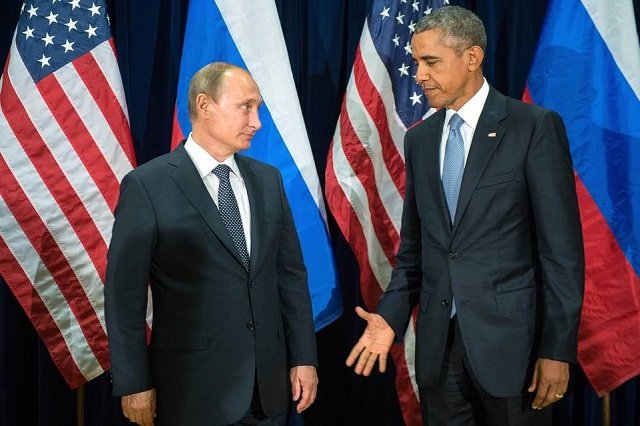 October 6, 2015 9:59 pm 0
From Damascus With Love
The Magician that Blindfolded the Crowd
Mr. President, Get The Facts First On Flotilla Incident

Obama’s preferred method for dealing with disagreement is denigration.

David Petraeus testified last month to the Senate Armed Services Committee on U.S. policy in the Middle East. Regarding Syria, the former general and CIA director urged a credible threat to destroy Bashar Assad’s air force if it continues to bomb its own people. He also recommended “the establishment of enclaves in Syria protected by coalition air power, where a moderate Sunni force could be supported and where additional forces could be trained, internally displaced persons could find refuge, and the Syrian opposition could organize.”

But Barack Obama does not agree. At his Friday press conference, the president described such views as “mumbo-jumbo,” “half-baked ideas,” “as-if” solutions, a willful effort to “downplay the challenges involved in the situation.” He says the critics have no answers to the questions of “what exactly would you do and how would you fund it and how would you sustain it.”

America’s greatest living general might as well have been testifying to his shower drain for all the difference his views are going to make in this administration.

So it is with this president. It’s not enough for him to stake and defend his positions. He wants you to know that he thinks deeper, sees further, knows better, operates from a purer motive. His preferred method for dealing with disagreement is denigration. If Republicans want a tougher line in Syria, they’re warmongers. If Hillary Clinton thinks a no-fly zone is a good idea, she’s playing politics: “There is obviously a difference,” the president tut-tutted about his former secretary of state’s position, “between running for president and being president.”

That’s because the president’s fundamental conviction about American foreign policy is that we need less of it—less commitment, less expense, less responsibility. Winston Churchill once said that the U.S. could not be “the leading community in the civilized world without being involved in its problems, without being convulsed by its agonies and inspired by its causes.” Mr. Obama sees it differently. He is the president who would prefer not to. He is the Bartleby of 21st century geopolitics.

As for what a serious Syria policy might look like, the U.S. proved it was capable of creating safe havens and enforcing no-fly zones in 1991 with Operation Provide Comfort, which stopped Saddam Hussein from massacring Kurds in northern Iraq the way he had butchered Shiites in southern Iraq.

This is how we wound up preventing what might otherwise have been a refugee crisis that would have rivaled the current exodus from Syria. It’s how we got an Iraqi Kurdistan—the one undisputed U.S. achievement in the Middle East in the past 25 years. It’s how we were later able to stop ISIS from swallowing northern Iraq and eastern Syria whole.

Reprising that formula in Syria won’t be simple, but what’s the alternative? John Kerry wants another grand conference in Geneva so the warring parties can settle their differences in a civilized way. Will ISIS be invited to the table? Donald Trump says that if the Russians “want to hit ISIS, that’s OK with me”—except the Russians are hitting U.S.-backed rebels instead of ISIS. There’s a view that staying out of Syria is the best way to get bad guys on all sides to fight their way to mutual extinction. But the lesson of the Syrian war is that chaos does not annihilate the forces of jihad. It turbocharges them.

“It is frequently said that there is no ‘military solution’ to Syria,” Gen. Petraeus said in his testimony. “This may be true, but it is also misleading. For, in every case, if there is to be hope of a political settlement, a certain military and security context is required—and that context will not materialize on its own.” Is this, too, mumbo-jumbo?

In the meantime, note what Vladimir Putin, lectured by Mr. Obama for getting Russia “stuck in a quagmire,” is achieving in Syria.

For a relatively trivial investment of some jet fighters and a brigade-sized support force, Moscow extends its influence in the eastern Mediterranean, deepens a commercially and strategically productive alliance with Iran, humiliates the U.S., boosts Mr. Putin’s popularity at home, and earns a geopolitical card he can play in any number of negotiations—Ukraine, gas contracts, Mr. Assad’s political future, you name it. If things don’t work out, he can pull up stakes within a week without much loss of money, lives or prestige. It’s a perfect play.

I spent some time staring at press pool photos of Mr. Obama and Mr. Putin at their recent encounter at the United Nations. The Russian seems to gaze at the president the way a good chess player approaches an inferior opponent—somewhere between delighted and bored by the intellectual mismatch. We’ve got 16 more months of this to go.