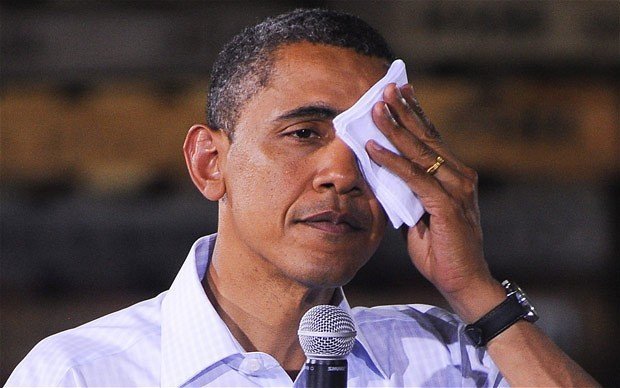 August 6, 2015 7:38 am 0
Why Wasn’t Obama Better Informed?
The People That Love or Hate Barack Obama
To Save Austin Tice

Source: The Examiner (President Barack Obama has on air meltdown over opposition to Iran nuclear deal)

President Obama, while before the TV cameras trying to sell that Iran nuclear deal, had an on air meltdown as only he could, saying alarming things in a measured, forceful tone, according to a Wednesday story in the Weekly Standard. He suggested that the mobs chanting “death to America” do not reflect the feelings of the Iranian people. Then he said, “”In fact, it’s those hardliners who are most comfortable with the status quo. It’s those hardliners chanting ‘Death to America’ who have been most opposed to the deal. They’re making common cause with the Republican caucus.” One presumes that also means the growing number of Democrats, such as Rep. Steve Israel, who are coming out against the deal.

The analysis in Hot Air of what might be the worst low the president has ever gone is well worth the read. Essentially, the president is using talking points from the mullahs and are using them as his own. But there is more.

“Actually, Obama’s insult may be worse than it at first appears. The major theme of this speech, as it always, always is — and always disingenuously — when Obama talks about diplomacy with Iran is that the only alternative is war. Reportedly he went so far today in a private meeting with Jewish leaders as to claim that Iranian rockets will rain down on Tel Aviv if the GOP-led Congress blocks the deal, because that will lead to war with Iran and war will lead to Iranian reprisals against Israel. Never mind that Iranian-made rockets already rain down on Israel every few years thanks to Hezbollah and that the sanctions relief Iran is getting from this deal will help pay for more of them. Never mind too that Israel’s own prime minister seems to think reprisals are a risk worth taking in the name of stopping an Iranian atomic bomb. The point, at least to Obama, is that only a warmonger would oppose this terrible deal, which all but endorses an Iranian bomb 10 years from now. Equating the Republicans in Congress with Iran’s hardliners was his way of suggesting, I think, that both of those groups actually seek war with each other in the name of advancing their own political interests. There’s no such thing as good-faith opposition to an Obama policy, at least outside the Democratic caucus. If GOP hawks hate his nuclear deal, it can only be because they’ve got Gulf War III on the brain and refuse to let some master stroke of diplomacy deter them.”

Obama’s snide remark was certainly not designed to change any minds. The cool meltdown he displayed how affronted that anyone were to doubt what he apparently views the greatest diplomatic coup of this century. Obama has a personality disorder that prevents him from dealing with disagreement very well or even understanding that there can be disagreement without base motivations. He cannot understand that the point that the growing numbers of opponents of the Iranian nuclear deal oppose it because they think, correctly, that it enables rather than prevents an Iranian nuclear bomb. If Iran gets the bomb because of the deal, the look on Obama’s face will likely be priceless. That’s because it will be bought at the price of millions of deaths.