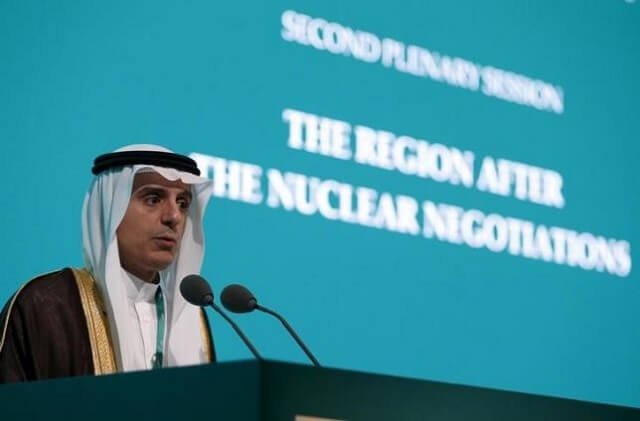 Praise the Saudis For Standing Their Ground

Russia and Iran must agree to a date and means for Syria’s psychopath Baschar al-Assad to quit the country, and agree to withdraw all foreign forces from Syria, Saudi Arabia’s Foreign Minister Adel al-Jubeir said in an interview with Sky News Arabia broadcast on Saturday.

Praise the Saudis for standing their ground against the terror of Assad and that of the Iranian Mullahs.

Arch regional competitors Saudi Arabia and Iran, whose rivalry has been aggravated by their support for opposing sides in Syria, both took part in talks to find a peaceful solution for the country for the first time in Vienna on Friday.

Jubeir said in the interview the Vienna talks, which will resume within two weeks, would show how serious Assad and his backers Iran and Russia were in seeking a peaceful solution to the crisis.

Praise the Saudis for standing their ground because most Syrians want Assad and ISIS hanging from ropes.

Assad and Iran accuse Saudi Arabia and its Gulf allies of being behind terrorism in Syria through their backing of rebel groups. Those countries say they only arm and finance secular or moderate Islamist rebel groups.

Considering the ex-prime minister of Lebanon, Rafik Hariri, a moderate Sunni Muslim who was killed by the psychopath Baschar al-Assad, was beholden to Saudi Arabia, the Saudi statement rings true.

Saudi Arabia has characterized Assad’s use of air power and artillery in Syrian cities as genocidal and has described the presence of Iranian military forces and Shi’ite Muslim Iraqi and Lebanese militia in Syria as a foreign occupation. Most Syrians agree with that assessment.

Praise the Saudis For Standing Their Ground