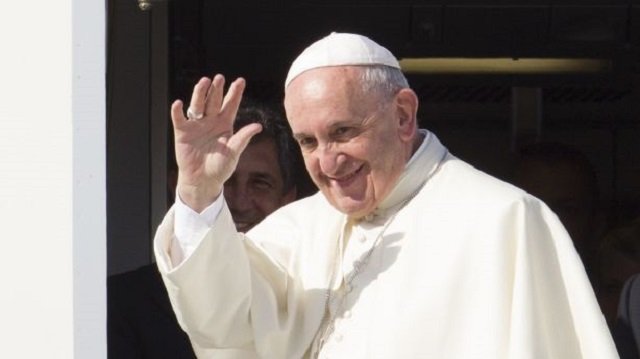 Pope Francis meets the Syrian refugee family. On Saturday, the pontiff described how he became emotional when he met the family who have been given shelter in the Vatican.

“There are wars, refugees who are escaping in this wave of migration away from wars,” he told reporters aboard the plane taking him from Rome to Havana to start his nine-day trip to Cuba and the United States.

“They are fleeing from death and seeking life,” he said.

Francis said that he became “emotional” at the Vatican, as he was leaving for the airport on Saturday morning, when he was greeted by a Syrian family that one of the parishes inside the tiny city-state is hosting.

“You could see the pain in their faces,” he said.

Earlier this month, Francis appealed to every parish and religious community in Europe to take in a family of refugees..

To set an example, the pontiff asked the two parishes inside the Vatican, a sovereign city-state surrounded by Rome, to take in a family.

“I think that today the world is thirsting for peace,” he said.

An emergency meeting of European Union ministers this week failed to agree on a plan to share out some 160,000 newly arrived refugees, a measure aimed at relieving pressure on the region’s border countries such as Italy, Greece and Hungary.

Until the Syrian refugee family status in Italy becomes legal, the Vatican has chosen to keep the identity of each member confidential.

Anyone who helps a Syrian refugee family is a hero in our book.