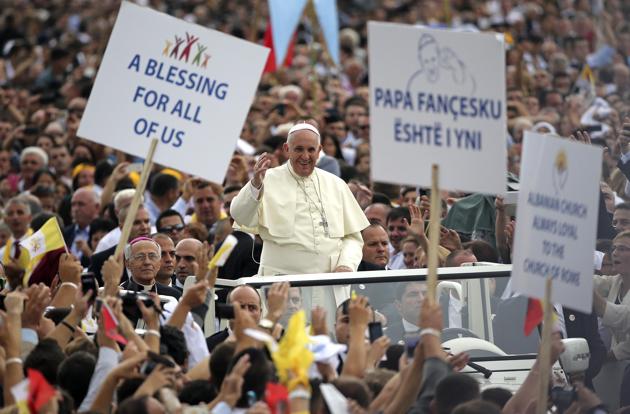 Le Figaro, a French daily center-right newspaper, published an article it entitled “The cry of anger of the Pope against the Jihadists” in which the Pope, while visiting Tirana, Albania, decried Islamic extremism in light of ISIL oppressive measures against the Christians of Iraq. The Pope delivered message the world wanted to hear.

“Let no one consider themselves to be the ‘armor’ of God while planning and carrying out acts of violence and oppression. May no one use religion as a pretext for actions against human dignity and against the fundamental rights of every man and woman, above all, the right to life and the right of everyone to religious freedom.”

Tirana, according to Le Figaro, claims a demographic of 56% Muslims, 16% Catholics, and 7% Orthodox. Most of those appearing to see the Pontiff were Albanian Muslims, which is why, Le Figaro contended, Pope Francis did not deliver an open air sermon at the Mother Theresa Square.

How many Christians, do you think, would show up to hear Sheikh al-Qardawi of Egypt speak? Or a Mufti from Yemen? Fear for dear life is an important factor affecting our decisions.

One of the other memorable sentences the Pope delivered dealt with death and discrimination. He said:

“Killing in the name of God is a great sacrilege. Discrimination in His name is inhumane”

Vatican Popes are not usually in the habit of rocking any boats when it comes to other religions. Usually, the most a Pope calls for is peace and understanding. This is exactly what Pope Francis called for in Syria.

Not only Le Figaro published the Popes’ direct attacks on extremism, so did CNN, BBC, and many publications around the world. Building awareness to the dangers of ISIL, when it comes to the safety and security of the minorities in the Levant, has fallen squarely on the shoulders of Pope Francis when our own president asserts to the American people that he has “No strategy” to combat ISIL in Syria.

Exactly the same way he never had a strategy to halt the Assad terror, which gave birth to the ISIL terror. Dare I nickname President Obama the no-strategy-bama?

The fact mostly Muslims showed to hear Pope Francis is a good sign that not all lost; it is also a sign of how broken the Middle East region is, and will be as long as the Syrian and the Iranian regimes are not confronted with brute force.

The “Fill the Blanks” President
Shadi Hamid speaks out
Will the Russians Kill Maher al-Assad?
Radicalism 567