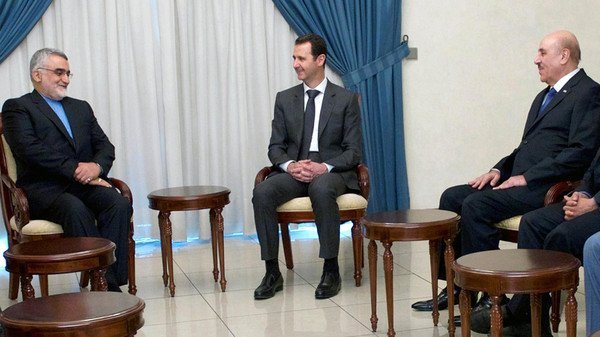 May 13, 2015 11:33 am 0
ISIS serving Assad
Death Toll Around Aleppo Since February 1
TOW Snipers Boast of Their Assad Tanks Kill Rate

“Hey, Abu Kamal. go to the house of the ibn sharmoutah Ali Mamluk and take his profile picture sitting down dressed in his Brioni suit. Bring it back right away. Orders from Iran.”

Abu Kamal complied with Iranian orders. He came back two hours later with a nice profile picture of Ali Mamluk sitting down and looking to his right. No bruises to his face and no signs of beatings. The magic of PhotoPop, PhotoShop in the hands of murderers and terrorists.

Later that day, Reuters published this story with a PhotoPop, PhotoShop image produced by the Syrian Arab News Agency or SANA showing Assad with the Chairman of the Iranian Shura Council’s Committee for Foreign Policy as well as Ali Mamluk.

Reuters described the PhotoPop, PhotoShop image with a story of their own:

A senior Syrian official reported to be under house arrest by Britain’s Daily Telegraph newspaper appeared at a meeting broadcast on Syrian state TV on Wednesday.

Oh, the magic of PhotoPop, PhotoShop.

All these Syrian security men Iran is killing or holding hostage (The Iranian Revolution single signature achievement) are weakening the Assad regime. Cannot have that. PhotoPop, PhotoShop to the rescue.

There is also a rumor that Iran may have also sent for its best morticians to revive the dead just in case they need another PhotoPop, PhotoShop opportunity.

Next is Rustum Ghazaleh meeting Assad after he rises from his tomb.

A photo of the meeting also appeared with a news story posted on the official SANA news agency website and dated May 13.

The Telegraph said on Monday that Mamlouk, who is a pillar of the country’s security establishment, had been put under house arrest after he was suspected of plotting a coup against Assad.

American technology in the service of America’s haters.