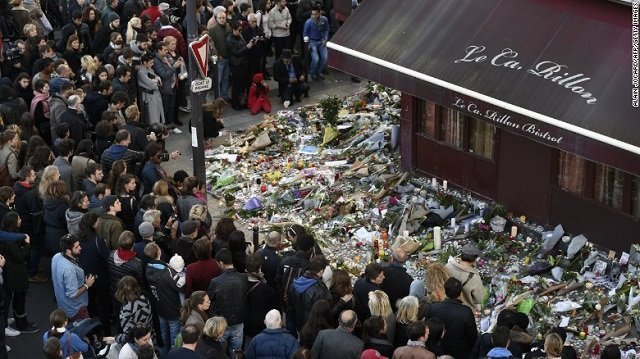 November 16, 2015 6:04 am 0
The Barack Obama Great War
UK Foreign Secretary and French Foreign Minister: Assad cannot be Syria’s future
Assad, ISIS Have Been ‘Ignoring’ Each Other on Battlefield, Data Suggests

Michael Ledeen wrote an article for Forbes Magazine that points us to the sophistication of the operation behind the multiple Paris attacks that took the lives of 130 people as of last count. In the article, Ledeen writes:

“Multiple attacks require training and preparation, and the French killers clearly had both. They also require command and control”

In other words, the Paris attacks require planning we believe ISIS alone may not possess. We all know ISIS was behind the operation, but the question is: Who was the mastermind behind the ISIS operation? Who has the sophistication Ledeen speaks off to execute with such precision? ISIS is being bombed daily in Syria and Iraq. Would they be able to plan and implement with such precision on their own? Or is the mastermind behind the Paris attacks the Assad/Iranian regimes who are milking the attacks to justify their killing of Sunnis? Can ISIS

Every crime has a motive, and every crime serves the interests of its criminal. Who truly benefits from the Paris attacks is the question we all must ask ourselves.

Ledeen, relying on the MO of the Paris attacks, alludes in his article to a possible Iranian connection, which is by extension also an Assad connection. He says:

Those of us who have been following terrorism for several decades will recognize the Parisian MO as textbook al Qaeda: Its first big time appearance in the terror war against the West came with the attacks on the US embassies in Kenya and Tanzania. The al Qaeda terrorists in East Africa were trained by Iran and Hezbollah, who had mastered that type of operation. We would later see the same pattern on 9/11 here at home, and in Mumbai, India, in 2008.

So we should certainly consider the possibility that al Qaeda did Paris, even though ISIL is the terrorist flavor of the year, and most of the publicly available information points in their direction. We shouldn’t pay great attention to the alleged statement of a captured terrorist, “We are ISIL and this is about Syria.” They’re trained to deceive us, not to tell us who they are and why they’re doing what they’re doing.

Waging war by proxy has reached such a sophisticated level that we must, naturally, always be skeptical of any terror attacks emanating from Syria or where Iran has an interest in its outcome. We must be skeptical when terrorists carry their Syrian passports on themselves during their suicide missions or shout some propaganda during the attack. Just consider how dumb this may be if your enemy is Baschar al-Assad of Syria, and your goal is to remove him from power.

The Paris attacks require planning ISIS alone may not possess. It is incumbent upon France to chase down every detail of this attack to reconstruct not only how its perpetrators were able to execute their horrific deeds with such precision but also to find the clues that could possibly lead to the theory we are embracing here at TFS that blames the Assad regime for the Paris attacks in order to convince Europe, which has supported his ouster, to side with his rule, not the rebels fighting for their freedom from his tyranny.

It is also incumbent upon France to monitor 24/7 all the Alawite Shabiha who left Syria behind to stand as Syrian refugees in France. These killers would have played a role in the planning of the attacks.

One of TFS staff once interviewed a known Assad supporter in Paris. He told the staffer that his job is to produce scenarios with outcomes that serve the interests of the regime by concocting the story line, which he then sells Damascus. His real job in life? He is a filmmaker. To stay in power, the Assad regime plans the most hideous operations based on the imaginations of filmmakers. If they can write a terror plot, they are capable of implementing it no matter how far reaching and unbelievable it may sound to others.

Just wait and see. Maybe tomorrow, maybe next week or next year, eventually the truth will be outed. Don’t be surprised if you learn that Assad was behind the Paris attacks all along. He has film makers who write his terror plots with fine details.