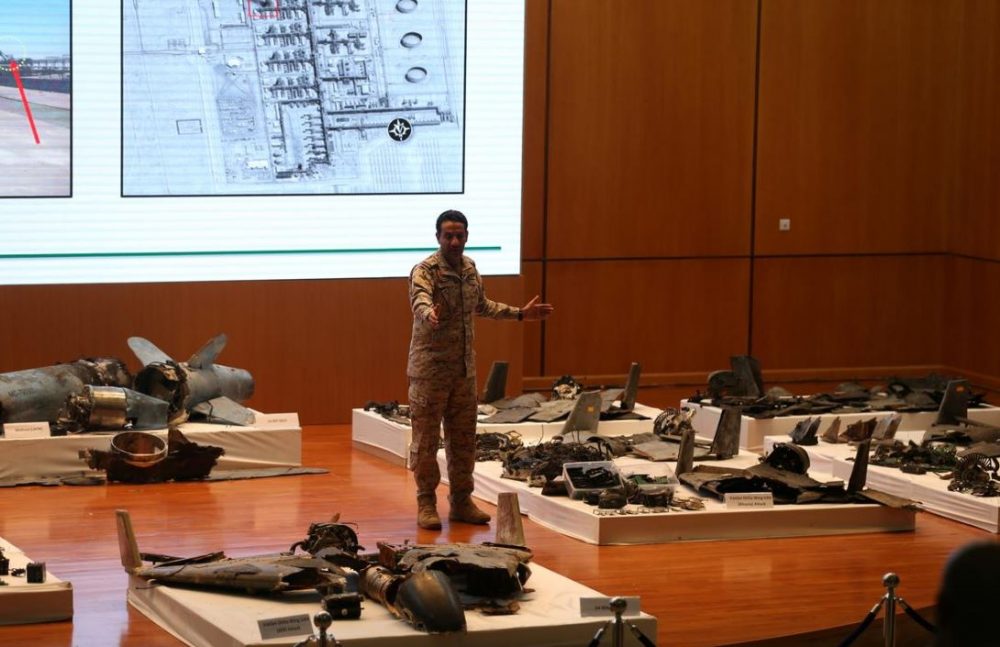 Options That Are a Lot Less to Defang Iran

U.S. President Donald Trump said on Wednesday there were many options short of war with Iran. “There are many options. There’s the ultimate option and there are options that are a lot less than that”.

Because Iran is a lot less dangerous than we think.

The president’s cautious note struck a cord in the hearts of our allies and every country that purchased the Patriot defense missile system to see it fail in protecting Saudi oil facilities.

At the same time Trump downplays U.S. responsibility, Secretary of State Mike Pompeo, during a visit to Saudi Arabia, described the attacks as “an act of war” on the kingdom, the world’s largest oil exporter.

I have just instructed the Secretary of the Treasury to substantially increase Sanctions on the country of Iran!

He told reporters his administration would unveil the unspecified, punitive economic measures within 48 hours.

Trump’s tweet followed repeated U.S. assertions that the Islamic Republic was behind Saturday’s attacks and came hours after Saudi Arabia said the strike was a “test of global will”.

Iran again denied involvement in the Sept. 14 raids, which hit the world’s biggest crude oil processing facility and initially knocked out half of Saudi output. Saudi Arabia is the world’s leading oil exporter.

Iran, like the Assad regime, lies about anything unfavorable to its goals.

UNQUESTIONABLY IRAN THEREFORE OPTIONS THAT ARE A LOT LESS

To bolster its assertion that Iran was responsible, Saudi Arabia showed drone and missile debris it said amounted to undeniable evidence of Iranian aggression.

Iran used a total of 25 drones and missiles in the attacks but not launched from Yemen, Defense Ministry spokesman Colonel Turki al-Malki told a news conference.

An investigation into the origin of the attacks was still under way and the result will be announced later, he said.

Proof of Iranian responsibility, and evidence that Iran launched it from its own territory, could pressure Riyadh and Washington into a response. Both nations, however, were stressing the need for caution.

Trump has previously said he does not want war and is coordinating with Gulf and European states.

Prince Khalid bin Bander, told the BBC the attack was “almost certainly” Iranian-backed: “We’re trying not to react too quickly because the last thing we need is more conflict in the region.”

The raid exposed the vulnerability of Saudi Arabia’s oil infrastructure and threw down a gauntlet to the United States, which wants to curb Iranian influence in the region.

“The attack is like Sept. 11th for Saudi Arabia. It is a game changer,” said one Saudi security analyst.

AN ACT OF WAR

Visiting Jeddah, U.S. Secretary of State Mike Pompeo said the attacks would be a major focus of next week’s annual U.N. General Assembly meeting. He suggested Saudi Arabia could make its case there.

It was an act of war against them directly, and I’m confident they will do that.

The two men “agreed that the Iranian regime must be held accountable for its continued aggressive, reckless, and threatening behavior,” the U.S. State Department said in a statement after their talks.

U.N. officials monitoring sanctions on Iran and Yemen were also heading to Saudi Arabia to investigate. Secretary-General Antonio Guterres said a major confrontation in the Gulf would have “devastating consequences” for the region and globally.

France, which is trying to salvage an international nuclear deal with Iran that Washington quit last year, said it wanted to establish the facts before reacting.

A U.S. official told Reuters on Tuesday the strikes originated in southwestern Iran. Three officials said they involved cruise missiles and drones, indicating more complexity and sophistication than initially thought. Understanding why the Patriot missiles failed is quite important at this point.

Saudi Arabia’s finance minister told Reuters the attack had no impact on revenues. He added that Aramco was continuing to supply markets without interruption.

U.S. efforts to bring about a U.N. Security Council response looked unlikely to succeed as Russia and China have veto powers. Both countries expect to shield Iran like they have shielded Assad of Syria for his crimes against humanity.

Options That Are a Lot Less to Defang Iran