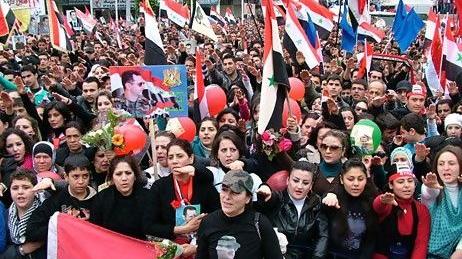 October 16, 2012 10:23 am 0
Salute the Alawites Revolting Against Assad
Syria’s Alawites Face Their Worst Nightmares
Son, Prepare Your Children for War

The distinction between Syrians of different religious backgrounds has become a concern to all Syrians. Long gone are the days preceding the Assad era when we Syrian-Americans could be proud of our teachers, our coaches, our doctors, or our politicians based on their services to the public. During the Assad era, we were made aware of who we were through tactical and often sectarian oppression that went beyond disfranchisement and discrimination to reprehensible tyranny with easy deaths. We say, one Syria for all and all Syrians for one.

Intellectuals sometimes make the mistake of categorizing all Arab Sunnis as a homogeneous religious group. We are not. A Gulf Sunni differs from a Levant Sunni and a N. African Sunni differs from a Gulf Sunni. We are neither Gulf Wahhabis nor N. African Muslim Brothers; in fact, we followed an ideology (al-Qawmieh al-Arabyeh) created by Antoun Saade, a Christian, and a political party (al-Baath) created by a Christian, a Muslim, and an Alawite. Compare this to the antiquity and singularity of Mohammad ibn Abdul Wahab or the political Islamisation and collectivism of Sayyed Qutb and Hassan Bana.

The Levant Sunnis (Syria, Lebanon, and Jordan) are far gentler than other Sunnis in other regions and far better educated because we co-mingled with minorities and other cultures for 2000 years. We are not perfect but we certainly are not extremist savages. Sunnis of the Levant never formed a Hezbollah-like or a Taliban militia or collectively fought someone else’s battle. Even the Palestinian cause was rammed down our throats by the “resistance” ideology of Assad. And although Syrians feel empathy for the Palestinians, our cause to re-build our nation will reign supreme after Assad.

ALAWITES VS. SUNNIS OR ALAWITES AND SUNNIS?

In the last four decades, Syrian Sunnis have relinquished their fate to the Alawites (Bad experience because of the Assad family). Some Sunnis to this day still trust their fate to the Alawites. As an example, take the al-Kawakibi family in Aleppo, one of the most prominent Sunni families with a deep history in defense of liberties dating back to the 19th century. Abdel Rahman al-Kawakibi wrote about Ottoman oppression the way many Syrians today write about the Assad oppression. The fact that al-Kawakibi support Assad today has a very profound meaning with regard to understanding how different the Sunnis of Syria are as compared to other Sunnis in other regions. We don’t fight, we trade. We are only fighting today to survive and to wash away the memories of the last 40 years of oppression.

True that relations were never ideal between the Alawite and the Sunni communities. True that Sunnis disrespected the Alawites and marginalized them. But Sunnis did not imprison illegally, torture or kill the Alawites of Syria. Sparse incidents of such, if they happened, were not part and parcel of a government policy whose central premise rested on this top priority. The Shabeeha militias have been dehumanized by the Assad regime to kill women and children without any emotions. It’s not random. The mistake made by Assad was to feel too comfortable applying these measures against the Syrian people reflecting no regard to the Alawites own well-being in the future. They placed themselves in a lose-lose situation all of Syria is paying the price for today.

The Sunni community today needs to address these issues within the context of a “mutual understanding” that will lead to stopping the hemorrhaging and the finger-pointing to begin the process of healing Syria and saving ourselves from mutual destruction. Within this framework, we respectfully peg to differ from ideas and notions being written about with regard to an Alawite independent state. However, we are for a temporary protected Sahel region for the Alawites and the Christians to be guaranteed by the international community after the fall of Assad in order to stop those intent on acts of revenge.

There is a good reason why we are against an Alawite state.

First, this is not 1936 (in reference to a letter written by Suleiman al-Assad to Léon Blum, the French Prime Minister at the time, in which he asks the French to support their own State) when France would simply entertain such a policy against an angry population nor is it a time when the Alawites of Syria could simply recoil after the fall of Assad and hide in the Sahel region as if pronounced guilty by their own actions. The Alawites, because of the Assad family, have been in command of all of Syria over the last 42 years. And the fact that Assad destroyed the country does not fare well with many Syrians who will see the forming of an Alawite State as an attempt to duck responsibility instead of working together to rebuild the country.

ONE SYRIA FOR ALL, ALL SYRIANS FOR ONE

Here are some of our own additional observations on this issue:

In this case, the question that needs to be asked the Alawite community is the following: Do you want to fight Islamic extremism as well as all Syrians from your own State, or do you want to fight Islamic extremism hand-in-hand with the majority of Syrians under one free and democratic Syria once Assad and all those who ordered Syria to be destroyed are brought to justice?

Syrians will find peace; Sunnis and Shia and Alawites and Christians and Druze will co-exist in one Syria if the Assad and the Iranian regimes fall. One Syria for all and all Syrians for one. We all learned our lesson. Dividing the country into ethnic religious groups will perpetuate violence, not resolve it. The better solution is Federalism but with a protective enclave for the minorities until we all mature enough to federalize.

Is this unrealistic? No, it is not. Syrians can, if they squeeze every ounce of their energies, give birth to hope in the midst of so much despair.

What Happens in Syria, Does Not Stay in Syria
More Like a Genocide than a Civil War
In Syria, Signs of Civilian Massacre
Opinions 1017 Syrian Revolution 1335 Things That Matter 382