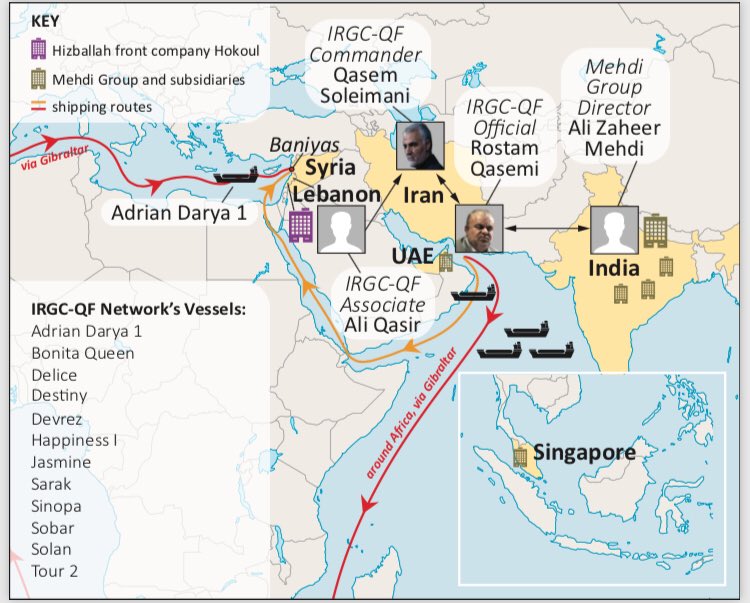 September 5, 2019 4:36 am 0
Why Should Saudi Arabia Stabilize Syria Without a Seat at the Table?
Iraqi Unrest Prompts the US to React
Assad is Winning the War Like Trump Won the Elections

The Department of the Treasury’s OFAC sanctions a vast Iranian shipping network, which the Islamic Revolutionary Guard Corps (IRGC) directs and supports to spread terror to Hezbollah and the brutal Assad regime in Damascus.

The treasury tweeted the news:

Over the past year, the IRGC-QF has moved oil worth hundreds of millions of dollars or more through this designated network for the benefit of the brutal Assad regime, Hizballah, and other illicit actors. https://t.co/gJoJuoXxU5 pic.twitter.com/3k4pLwTwuo

The Treasury website issued a statement in which it detailed the reasons for the sanctions:

Over the past year, the IRGC-QF has moved oil worth hundreds of millions of dollars or more through this network for the benefit of the brutal Assad regime, Hizballah, and other illicit actors. Senior IRGC-QF official and former Iranian Minister of Petroleum Rostam Qasemi oversees this sprawling network, which features dozens of ship managers, vessels, and facilitators. This complex network of intermediaries enables the IRGC-QF to obfuscate its involvement in selling Iranian oil. The IRGC-QF also relies heavily on Hizballah officials and front companies to broker associated contracts. OFAC also is issuing a new shipping advisory to the maritime community warning of these types of schemes and the sanctions risks associated with blocked persons.

The statement accused Iran of destabilizing the region.

“Iran continues to take provocative actions to destabilize the region and the world. Treasury’s action against this sprawling petroleum network makes it explicitly clear that those purchasing Iranian oil are directly supporting Iran’s militant and terrorist arm, the IRGC-Qods Force,” said Treasury Secretary Steven Mnuchin. “Our actions over the last two weeks should serve as a strong warning to anyone considering facilitating the Qods Force’s oil sales that there will be swift consequences.”

“The Iranian regime is leveraging a terrorist organization as its chief conduit for obfuscating and selling hundreds of millions of dollars of illicit oil to fuel its nefarious agenda. Iran’s exportation of oil directly funds acts of terrorism by Iranian proxies and atrocities by the Assad regime against innocent people,” said Sigal Mandelker, Under Secretary for Terrorism and Financial Intelligence. “This vast oil-for-terror shipping network demonstrates how economically reliant Tehran is on the IRGC-QF and Hizballah as financial lifelines. The international community must vehemently reject Iranian oil and related products in the same way that it rejects the violent acts of terrorism these networks fund.”

This is good news for any Arab countries suffering from Iranian terror. Just like Syria.

It aims at pressuring Iran to negotiate a deal with the west that limits its capacity to spread terror; in addition to exiting the Syrian theater.

It is highly likely the Treasury Department has up its sleeve a number of other even more severe sanctions. Most likely, OFAC would be willing to deploy them to tighten the screws on the terrorist Mullahs in Tehran.

The longer Iran stands on the sideline, the more its economy will suffer. Some of what the Iranian economy is enduring is unrecoverable. Things like market share, infrastructure decay, and outdated equipment with a high costs to replenish.