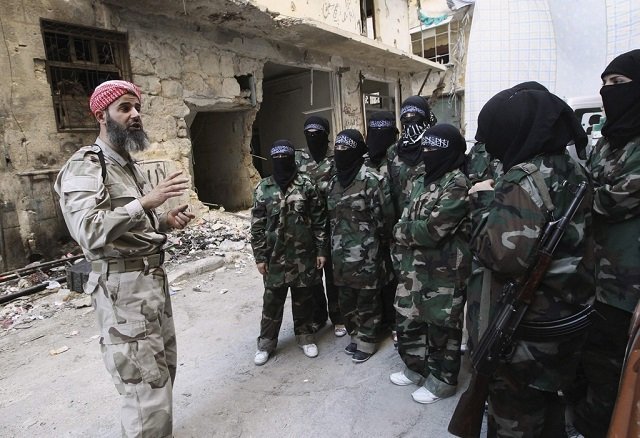 Can President Barack Obama do one thing right in Syria and for Syria when it comes to ISIS terror? Can Obama’s plans save us from ISIS terror?

We know he is unwilling to put an end to the Assad atrocities, but now it seems, even if he tries, Obama’s plans are unable to stop the ISIS atrocities too. Not on the ground at least.

Congress provided the president with $500 million to train Syrian moderates to combat ISIS. In one year, Obama found and trained 54 Syrians. Just a perfect number to start a football team instead.

Why he failed? Because Obama’s plans were designed for his trainees to battle ISIS only, not Assad. Who is the genius at the White House who devised this idea?

Obama’s plans against ISIS are going up in smoke.

Here is how Tom Perry of Reuters described what is happening to these hapless souls who trusted America with their lives.

[Activists on the ground] also reported that warplanes believed to be part of a U.S.-led alliance had bombed Nusra Front positions in the area near the town of Azaz, north of Aleppo city.

The fighting, which had killed at least 13 people on both sides, points to one of the major complications facing U.S. and Turkish plans to jointly sweep Islamic State militants from northern Syria.

The Nusra Front, one of the most powerful insurgent groups in northern Syria, has a track record of crushing rebel groups that have received support from Western states, including the Hazzm movement that collapsed earlier this year.

Opposition sources say that one of the rebel groups targeted in Nusra’s overnight attack, Division 30, has been a participant in the newly launched U.S.-led program to train and equip insurgents to fight Islamic State.

Division 30 says Nusra fighters abducted its leader and several other members earlier this week. The Pentagon has said however that no members of the “New Syrian Force” had been captured or detained.

Division 30 said Nusra Front fighters attacked its headquarters at 4.30 am in the area near Azaz. Five members of Division 30 were killed as they held off the attackers, it said.

The group has accused the Nusra Front of abducting its leader and several other members earlier this week.

Syrian opposition sources say members of Division 30 have been trained under the U.S.-led train and equip program launched in May. The Pentagon has however cast doubt on the report, saying that no members of the “New Syrian Force” had been captured or detained.

Another rebel group in the area said it had also clashed with Nusra Front in Azaz.

Jaish al-Thuwar, a rebel alliance formed earlier this year said in a statement posted on Facebook on Friday four of its members and at least eight attackers had been killed.

The Nusra Front, which Washington has designated a terrorist organization, last year routed the Syria Revolutionaries Front led by Jamal Maarouf, viewed as one of the most powerful insurgent leaders until his defeat.

It was also instrumental in the demise of the U.S.-backed Hazzm Movement, which collapsed earlier this year after clashing with the Nusra Front in the northwest.

Washington and Ankara this week announced their intention to provide air cover for Syrian rebels and jointly sweep Islamic State fighters from a strip of land along the border, with U.S. warplanes using bases in Turkey for strikes.

There may be about 20-25 Syrians left in the U.S. program after taking into account those who died in the raid and those who were abducted.

Maybe Obama can re-train them to play basketball instead. There are enough of them to create two national rebel basketball teams that one would be named Barack and the other Obama.

Can this president do one thing right in Syria? Honestly, just one tiny, bitty, bitsy, wee little thing.

Israeli envoy: Nuclear Iran is a ‘thousand times’ more dangerous than ISIS
Who Will Perish First ISIS or The Moderate Syrian Opposition?
You kill Americans you pay a hefty price
Slippery Barack Obama 976