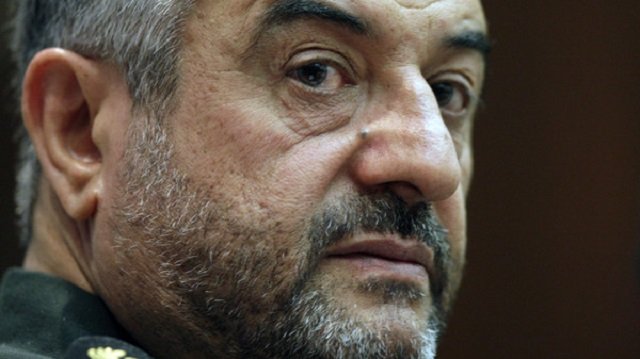 September 1, 2015 11:02 pm 0
The Art of No Compromise
Saudi Arabia Can Stop the Iran Deal if …
US State Department Noon Briefing on Syria Mentioning Farid Ghadry

The head of Iran’s elite Revolutionary Guard said Tuesday that the U.S. is still the “Great Satan,” regardless of the nuclear deal struck with Americans and world powers over the Islamic Republic’s contested nuclear program.

The glory of Obama’s partners shine a dark light on his legacy. Are we supposed to take Iranian terror on the cheek?

The comments by Gen. Mohammad Ali Jafari, reported by the official Guard website, said that “the enmity against Iranian nation by the U.S. has not lessened and it has been increased.”

“We should not be deceived by the U.S.,” Jafari reportedly said. “It wants to infiltrate into Iran, resorting to new instruments and method.”

The Guard and hard-liners remain suspicious of the U.S., even as authorities look over the historic accord that curbs Iran’s nuclear program in return to lifting economic sanctions.

Earlier Tuesday, Ayatollah Mohammad Yazdi, the head of powerful Iran’s Experts Assembly, which oversees the nation’s Supreme Leader and institutions under his supervision, also said the nuclear deal will not alter Iran’s foreign policy toward the United States.

“The Islamic Republic of Iran considers the U.S. its No. 1 enemy,” Yazdi said. “If you try to discover the root of the sedition that is happening around us today, you will identify U.S. as its main supporter.” These are Obama’s partners our President is giving up $150 Billion to.

Let them kill each other
Next is the psychological war
Iran Deal is About Right and Wrong, Not Left and Right
Iranian Terror 594 Slippery Barack Obama 976