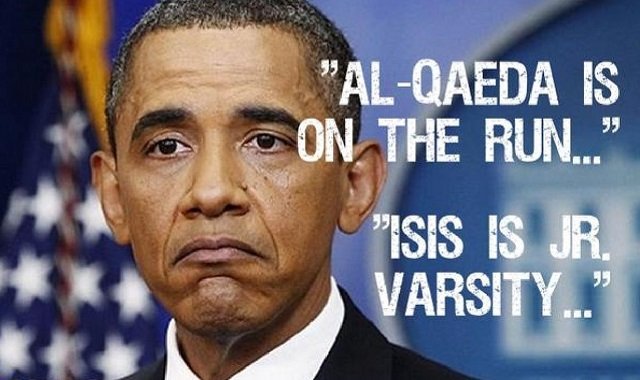 November 15, 2015 1:05 pm 0
Russian Airstrikes in Syria Seem to Be Hurting Civilians More Than ISIS
Shadi Hamid speaks out
Is Obama wagging the dog?

When overwhelming responsibilities attributed to the complexities of a job the elected president trusted with fulfilling is ill-prepared to handle, political spin becomes the pillow upon which legacies find comfort from an under-achiever commander-in-chief. When Barack Obama labeled ISIS as a JV team, little did he know that his incompetent JV team is about to win the World Cup of terror in Paris.

As much as his Red Line on Syria has identified how ignorant Barack Obama was, Obama’s JV ISIS team labeling, even more, demonstrated to the world how ill-equipped this community organizer he is to handle the complexities of the job we wrongfully trusted him with. Obama’s JV ISIS team just won the World Cup of terror in Paris.

It is easy to accuse a man of incompetency, but it is much harder to accuse an ideology of the same attribute. Because long after Barack Obama leaves office, half the American people will remain clueless about how wrong it was to elect Obama to the White House, and the other half, holding tight to the same ideology that thrust Obama unto the international stage, will continue to believe they could do a better job next time if only they could tweak their ideology a bit more. America has learned nothing from the Iranian Revolution of 1979 or from the Iranian terror that killed thousands of US troops in Iraq. We learned nothing from the mistake of watching the ISIS terror grow in front of our eyes while our president sips lemonade on the White House porch.

The cheering from the sideline for Obama to sign his Iran Deal that installs Iran in Damascus still reverberates even as we pick the pieces from the Obama’s JV ISIS team World Cup of terror in Paris. When we ignore terror, Obama still has to learn, it comes back to bite us all. When we ignore Iranian terror in Syria, which had a hand in forging ISIS the way it forged al-Qaeda in Iraq, we look as dumb as Obama looks today when he claims ISIS is not stronger and that his work has contained the terror group.

America is a gargantuan ship with a small rudder. Any decision any U.S. President makes, on domestic or international policies, take time to trickle down for the general public to judge the results. Not so when it comes to terror, which moves at a lightening speed. We wish we were not that lucky to judge how incompetent Barack Obama is while he is still in office because in doing so, we are all witnesses to horrific acts of terror the result of Obama’s JV ISIS team as well as ignoring all the signs to act decisively. He dithered, and waited. He ignored, and mocked. He turned deaf to more experienced voices telling him to act against Obama’s JV ISIS team. Obama is by far the best writer of his own horrific legacy.

While we chew on what Obama should or should not have done, let us also look at ourselves in the mirror. Let us judge ourselves for weighing between the terror of ISIS and the terror of Assad as if our intellectual capacity to survive can only muster to exist with one or the other. Very few world leaders have pursued the line of eradicating terror in all its forms, methods, visages, and deceptions. Most have opted for considering one over the other as if humanity has reached its potential to defend itself.

Better the savagery of Assad against his own people than the barbarism of Obama’s JV ISIS team against all humanity, they said. That someone could have foreseen that Assad could use Obama’s JV ISIS team as a proxy to spread terror or that ISIS recruitment and Sunni historical terror revenge would only make matters more dangerous if Iranian terror goes unchecked never occurred to a world leader. It is far easier to appease our tormentors than to destroy them until someone truly believes it is either them or us.

By all means, do pursue ISIS to destroy these savages. But if you think more bullets and bombs will stop ISIS while Iran is let free to throw its terror weight around Arab peoples and lands will eventually defeat ISIS, you are sorely mistaken. Either commit to eradicate all terror, to include the Sunni and the Shiite terror, or just stay home to wait for the next World Cup of terror to strike another European capital.

All terror or bust.

Syria’s Christians Fight Back Against ISIS and Assad
One Down, Few Thousands To Go
ISIS serving Assad
Slippery Barack Obama 976