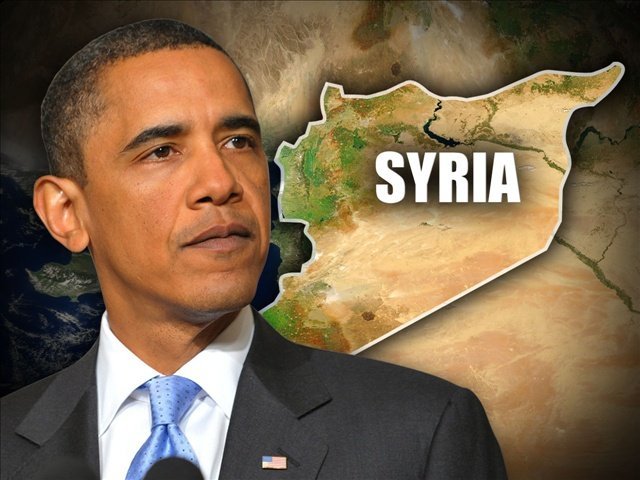 Obama’s Doctrine: Extend a War to Defeat You Just to Force a Peace That Won’t Serve You

To those who wondered why Ben Rhodes, a Deputy to the National Security Adviser, delivered the news on Syria, here is your answer.

President Obama is assisting the Syrian rebels, or so his Office says, just enough to pressure Putin to meet John Kerry in Geneva for a Kumbaya peace celebration; as well as – this is my take on the matter – hope Putin will not, in the future, keep Kerry waiting outside his Kremlin office for more than one hour, two at the most.

When the President said he would consult with allies during the G8 summit in Belfast, he hoped he could force Putin into a negotiated settlement (i.e. Kerry’s peace conference) if he delivers small weapons to the rebels.

May G*d help the United States of America from further damage and humiliation because at the helm is a President who is clueless about the nature of evil be it coming from the Soviets still aiming to cause Americans and Syrians harm or the Islamists he considers harmless and legitimate.

Listen to Democratic Congresswoman Jane Harman on Fox News Sunday when she blamed Obama for a missed opportunity on Syria. She then added: “Maybe, maybe, let’s just dream about this, with Russia and others, we can announce a much more aggressive policy on Syria”.

All this spin about policy change on Syria by the Obama Administration is nothing more than an attempt to force Russia into a peace conference the failing results of which almost everyone knows in advance except for Obama and Kerry. Neither men see the danger of Hezbollah and Iran winning while they pursue a doomed conference that keeps Iran strong and Hezbollah’s lethal weapons threatening everyone and everything.

Keeping an eye on the prize is not Mr. Obama’s forte because the goal here is not to win. The real goal is not to be humiliated any further by Putin, as well as force the Syrian people to make peace with their butcher. In other words, extend the war to defeat you just to force a peace that will not serve you.

What is next? An al-Qaeda peace conference with Kerry leading the charge?

You see, Vladimir Putin kept John Kerry waiting for three hours before seeing him the last time Kerry visited the Kremlin in May and Mr. Obama is partially sending some small arms and ammunition to the rebels just so Mr. Putin accords Kerry the same courtesy he accorded PM Cameron by not keeping him waiting for more than an hour.

According to James Sherr writing in the Moscow Times:

“Soviet leaders used to keep foreign emissaries waiting in order to test their strength and intentions, and on his first trip to the Kremlin as secretary of state, Kerry was kept waiting three hours before President Vladimir Putin received him. If Kerry was aware of these precedents, he didn’t show it. His tone at a news conference with Foreign Minister Sergei Lavrov (at which he thanked Putin for his “very generous welcome”) was elaborately conciliatory.”

The weaker Kerry is, the more danger America will face. Many miss this important truth.

The Syrian casualties, the Assad savagery, the Islamists flourishing in Syria and Lebanon, Iran losing big, and Hezbollah getting a good beating are not really of concern to the President. These are side issues for him. The most important matter on Syria is to send Putin a message rendered weak intentionally when delivered by a Deputy National Security Adviser instead of a Principle or the President himself so as not to offend him, or the Ayatollahs for that matter.

I have this awkward feeling of a deja vu that there will be no-fly zones, no heavy weapons, and no strategy to force Assad out, or weaken Iran and Hezbollah.

Unless the NBA recruits a Syrian who could persuade Obama if he saves Syria, better players will emerge, there is no need to hold your breath hoping Obama wants to defeat Assad, Iran, or Hezbollah.

It just seems no one speaks the strange language of Obama or follows his logic that in order to force peace, you must be defeated by wars.

Obama’s Doctrine: Extend a War to Defeat You Just to Force a Peace That Won’t Serve You