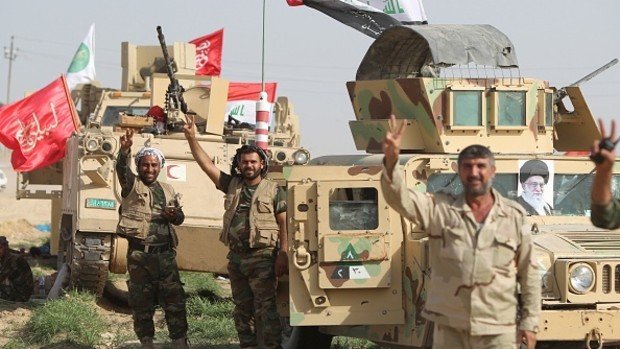 The U.S. military and Iranian-backed Shiite militias are getting closer and closer in Iraq, even sharing a base, while Iran uses those militias to expand its influence in Iraq and fight alongside the Bashar al-Assad regime in neighboring Syria.

Two senior administration officials confirmed to us that U.S. soldiers and Shiite militia groups are both using the Taqqadum military base in Anbar, the same Iraqi base where President Obama is sending an additional 450 U.S. military personnel to help train the local forces fighting against the Islamic State. Some of the Iran-backed Shiite militias at the base have killed American soldiers in the past.

Some inside the Obama administration fear that sharing the base puts U.S. soldiers at risk. The U.S. intelligence community has reported back to Washington that representatives of some of the more extreme militias have been spying on U.S. operations at Taqqadum, one senior administration official told us. That could be calamitous if the fragile relationship between the U.S. military and the Shiite militias comes apart and Iran-backed forces decide to again target U.S. troops.

American critics of this growing cooperation between the U.S. military and the Iranian-backed militias call it a betrayal of the U.S. personnel who fought against the militias during the 10-year U.S. occupation of Iraq.

“It’s an insult to the families of the American soldiers that were wounded and killed in battles in which the Shia militias were the enemy,” Senate Armed Services Chairman John McCain told us. “Now, providing arms to them and supporting them, it’s very hard for those families to understand.”

The U.S. is not directly training Shiite units of what are known as the Popular Mobilization Forces, which include tens of thousands of Iraqis who have volunteered to fight against the Islamic State as well as thousands of hardened militants who ultimately answer to militia leaders loyal to Tehran. But the U.S. is flying close air support missions for those forces.

The U.S. gives weapons directly only to the Iraqi government and the Iraqi Security Forces, but the lines between them and the militias are blurry. U.S. weapons often fall into the hands of militias like Iraqi Hezbollah. Sometimes the military cooperation is even more explicit. Commanders of some of the hard-line militias sit in on U.S. military briefings on operations that were meant for the government-controlled Iraqi Security Forces, a senior administration official said.

This collaboration with terrorist groups that have killed Americans was seen as unavoidable as the U.S. marshaled Iraqis against the Islamic State, but could prove counterproductive to U.S. interests in the long term, this official said.

The militias comprise largely Shiite volunteers and are headed by the leader of the Iraqi Hezbollah, Abu Mahdi al-Muhandis. He was sanctioned in 2009 by the Treasury Department for destabilizing Iraq. Al-Muhandis is a close associate of Qassem Suleimani, the Iranian Quds Force commander, who has snapped selfies with the militia leader at key battles.

Other militias that have participated in the fighting against the Islamic State include the League of the Righteous, which in 2007 carried out a brutal roadside execution of five U.S. soldiers near Karbala. The group to this day boasts of its killing of U.S. soldiers. In an interview in February, a spokesman for the militia defended the killings and said his militia had killed many more American soldiers.

Members of these groups have also been deployed by Iran to defend the Assad regime in neighboring Syria. James Clapper, the director of National Intelligence, confirmed in a June 3 letter to seven Republican senators, which we obtained, that “Iran and Hezbollah have also leveraged allied Iraqi Shiia militant and terrorist groups — which receive training in Iran — to participate in pro-Assad operations.”

The Washington Institute in 2013 identified three militias — the League of the Righteous, Iraqi Hezbollah and Kataib Sayyid al-Shuhada — as sending elite fighters to Syria to fight for Assad.  All three help to lead the popular mobilization committees that fight the Islamic State in Iraq.

These militias also stand accused of gross human rights abuses and battlefield atrocities in Sunni areas where they have fought. The State Department heavily criticized Iran’s support for the Iraqi militias and those militias’ behavior in its annual report on worldwide terrorism, released late last week.

“Despite its pledge to support Iraq’s stabilization, Iran increased training and funding to Iraqi Shia militia groups in response to ISIL’s advance into Iraq. Many of these groups, such as Iraqi Hezbollah,have exacerbated sectarian tensions in Iraq and have committed serious human rights abuses against primarily Sunni civilians,” the State Department reported. “Similar to Hezbollah fighters, many of these trained Shia militants have used these skills to fight for the Assad regime in Syria or against ISIL in Iraq.”

Accounts of the number of Iraqi Shiite fighters at Taqqadum vary. One senior administration official told us there are “only a few” militia representatives at the base, to coordinate with Iraqi Security Forces, while the bulk of the popular mobilization forces are deployed in the field, mostly around Ramadi, which is held by the Islamic State. A different senior administration official told us that there were hundreds of Shiite militia fighters at the base recently and that they flow in and out of the base for operations in the area.

The U.S. government has sought and received formal assurances from the government of Iraq that the Shiite militias on the base would not interfere with American military personnel. But there’s widespread skepticism that the politicians in Baghdad exert any real control over the hard-line militias. So far, in the 11 months since U.S. special operations forces have been in Iraq, Iranian-supported militias in Iraq and U.S. personnel have not clashed while fighting a common enemy.

“There’s no real command and control from the central government,” one senior administration official said. “Even if these guys don’t attack us … Iran is ushering in a new Hezbollah era in Iraq, and we will have aided and abetted it.”

With the deadline approaching for a nuclear deal that would place up to $150 billion in the hands of Iran, the U.S. is now openly acknowledging in its annual report on international terrorism that Iran is supporting a foreign legion, comprising Afghans, Iraqis and Lebanese fighters, to defend Iranian interests throughout the Middle East.

But the U.S. response to this is inconsistent. In Iraq, America is fighting alongside Iranian-backed militias. In Syria, U.S.-supported forces are fighting against these same militias. The tragedy of this policy is that the Islamic State has been able to hold and expand its territory in Iraq and Syria, while Iran has been able to tighten its grip on Baghdad.

Will Bahrain Fall to Iran After Lebanon?
The Obama-Khamenei alliance
Who is Protecting Assad Inside the Arab League?
Slippery Barack Obama 976