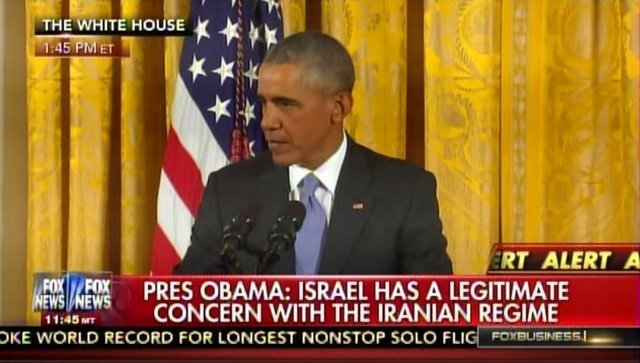 July 16, 2015 9:03 am 0
In Syria, Chlorine Attacks Continue To Take A Toll
How the Media’s Focus on Kobani Obscures the War in Syria
War of attrition the minorities cannot possibly win

During his press conference to answer questions about his bad Iran deal, Barack Obama told reporters that 99% of the world community agreed with him (See video below).

I’m hearing a lot of talking points being repeated that this is a bad deal. That this is a historically bad deal. This will threaten Israel and threaten the world and threaten the United States. There’s been a lot of that. What I haven’t heard is what is your alternative. If 99% of the world community and the majority of nuclear experts look at this and say ‘This will prevent Iran from getting the bomb,” and you are arguing either that it does not, or even if it does it’s temporary, or because they are going to get a windfall of their accounts being unfrozen they’ll cause more problems, then you should have some alternative to present.

Obama’s 99% or Assad’s 99%, they are both one and the same. Invented numbers by bad people who believe the world stands by their choices and decisions. Assad’s 99.2% culminated in the majority of Syrians rising to depose him.

Obama’s 99% will also create a backlash against a U.S. President who lives in a bubble and whose rhetoric has become as poisonous as any informed American voter can take.

Obama’s 99% is going to turn him into an outcast in the minds of smart voters because throwing a false number like this during such a historic moment challenges their intellect and demeans their capacity to separate fact from fiction.

Obama’s 99% will also have an impact on our legislators whose sense of democratic values Barack Obama is incapable of dissecting and fragmenting. Any Senator with a sense of the great history of this nation will not take kindly to Obama’s 99% the same way he/she mocks Assad’s own 99%.

Exaggeration tends to send the best and the worst of us into a rebellious mode. The silent dissent against Obama’s 99% choice of words is brewing slowly. Americans tend to resist a Rasputinian-like atmosphere that shockingly invades their world.

Obama’s 99% or Assad’s 99%, they are both one and the same. Words uttered by men whose narcissism is the essence of the surreal.