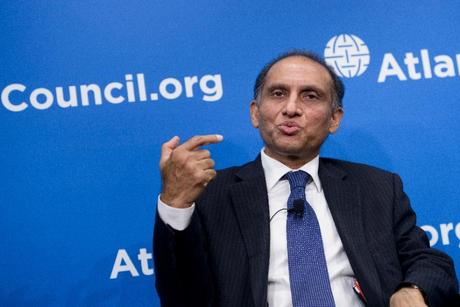 Is Obama Pressuring Pakistan to Save His Iran Deal?

June 5, 2015 7:26 am 0
Is Obama Looking Forward to Target Syria with Drones?
India Lends Its Moral Support, Pakistan Its Military
Iran the cunning chameleon according to Harold Rhode

Pakistan’s foreign secretary on Thursday hotly denied his country could sell Saudi Arabia an “off-the-shelf” nuclear weapon, after days of high-level talks in Washington. Is Obama pressuring Pakistan to save his Iran deal? Since June 30 is fast approaching, the deal may remain as bad as it was thus prompting Obama to resort to arm twisting to save it.

After meetings at the White House, Pentagon, and State Department, Aizaz Ahmad Chaudhry described the suggestions Pakistan could sell a weapon as “unfounded, baseless and untrue.”

Pakistan’s nuclear program has nothing to do with any other country. This is a deterrence that we develop in response to a threat perception that we have from our east. That’s it. Pakistan is not talking to Saudi Arabia on nuclear issues, period.

Gulf diplomats have suggested that Saudi Arabia and perhaps even the United Arab Emirates could buy a bomb from their staunch allies in Islamabad to safeguard against a nuclear Iran.

For decades Tehran has been building its nuclear capability, although it denies allegations from the west that the program is military-focused.

Anxiousness has peaked as President Obama prepares to ink a nuclear deal with Iran. Is Obama pressuring Pakistan to keep give Iran a nuclear advantage?

While the planned agreement is intended to curb Iran’s nuclear program, Tehran would retain significant capabilities with a short “breakout period” needed to weaponize.

Israeli PM Benjamin Netanyahu has been critical of the deal because it paves the way for Iran to build a nuclear arsenal.

Saudi Arabia also fears that resulting U.S. sanctions relief would hand its Persian and Shiite arch foe tens of billions to spend on its military, while key elements of the nuclear program would remain intact.

Meanwhile, Pakistan’s stance on non-proliferation has long been called into question. This latest news making flurry may be intended for Obama pressuring Pakistan to save his Iranian deal knowing the Saudis are serious about defending themselves.

At the turn of the millennium it emerged that AQ Khan, the father of Pakistan’s nuclear program, had been selling nuclear blueprints to Libya, North Korea and Iran.

The government has long denied his actions were officially sanctioned.

Is Obama Pressuring Pakistan to Save His Iran Deal?