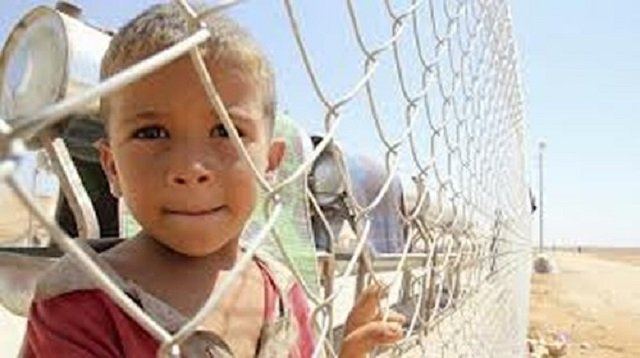 President Barack Obama grows a conscience suddenly under pressure from other Democrats. He just directed his administration to prepare to take in at least 10,000 Syrian refugees over the next year. This comes after almost five years of a civil war that witnessed almost 9 million displaced Syrians.

Obama grows a conscience only under pressure. So far this White House has welcomed 1,500 Syrian refugees and killed 459 Syrian and Iraqi civilians with its air strikes against ISIS. For every three souls Barack Obama saves, he kills one.

It is the first specific commitment the United States has made toward increasing its acceptance of refugees from the war-torn country.

Since the start of the Syrian civil war in 2011, the United States has taken in 1,500 refugees, with 300 more expected to be cleared by October.

But refugee advocates and some members of Congress said taking in an additional 10,000 refugees does not go far enough toward addressing the humanitarian crisis triggered by the war, which has prompted a massive refugee influx into Europe.

In a letter distributed to House members and seen by Reuters, Democratic Representative David Cicilline asked Obama to accommodate 65,000 Syrian refugees by the end of 2016. Religious groups have called for the United States to accept 100,000 Syrian refugees.

European countries have taken in waves of migrants fleeing violence. Germany allowed 20,000 in over the weekend and is preparing for 800,000 this year.

Melanie Nezer, vice president of HIAS, a global refugee advocacy group, said allowing 10,000 more refugees from Syria is not an adequate response to the crisis at hand. He told Reuters:

“This is totally within the realm of what the current system on autopilot could do. This is not time for autopilot. This is time to really ramp things up,”

The United States is conducting air strikes in Syria as part of its effort to fight against Islamic State. It currently admits annually a total of 70,000 refugees from around the world, and is due to increase that total by 5,000 for the fiscal year starting in October.

White House spokesman Josh Earnest would not say whether the 10,000 Syrians would be a part of or in addition to that total. Even as Obama grows a conscience, he tries to take more credit than he is due.

Earnest said national security was a top concern for admitting Syrians, a country rife with anti-American militants, noting that intensive security screening for refugees could take up to 18 months.

“I do feel confident in telling you that the president will not sign off on a process that cuts corners when it comes to the basic safety and security of the American people and the U.S. homeland,” Earnest told reporters.

The additional background checks and processing will require a “significant financial commitment” from Congress, Earnest said.

Even Democrats are Critical of Obama
Where Do We Go From Here on Syria?
Sponsored Corruption and Neglected Reform in Syria
Slippery Barack Obama 976