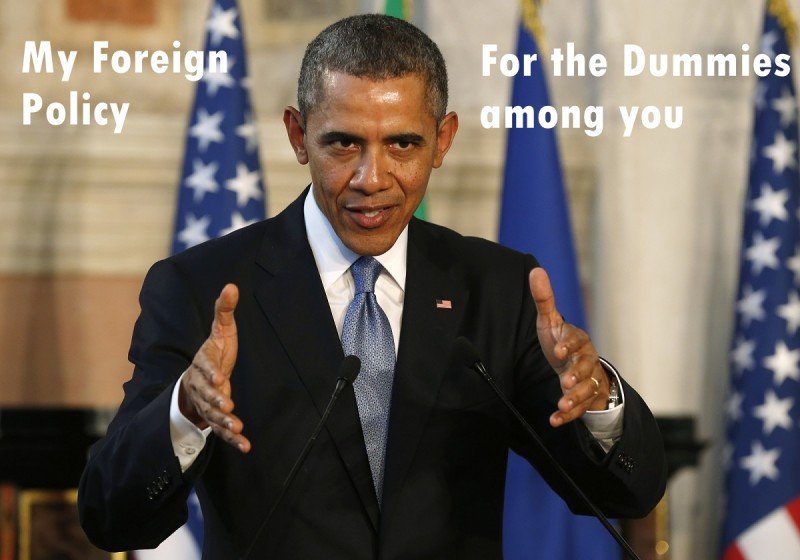 April 14, 2015 10:18 am 0
On Obama’s foreign policy, Clinton got it right
The President Daydreams on Iran
Isolationism vs Neo-conservatism

There are those among us who still refuse to acknowledge the genius of “Obama five pillar foreign policy for dummies” in the Middle East. To explain it in layman’s terms, I asked my friend Falafel to interpret it for us.

“The one important matter to know about Obama five pillar foreign policy for dummies is to ignore logic” said Falafel to a class of new U.S. State Department recruits about to face the Middle East. “Logic in this instance is like playing ducky with your plugged-in toaster in your bathtub.”

“Let us begin by recognizing some facts. In the United States, we label any group that attacks our interests, our armed forces overseas, or our embassies as terrorists. As such, under this administration, Iran, which funded, trained, and instigated al-Qaeda and ISIS to attack our U.S troops in Iraq is labeled as an ally of this administration.”

“Contrarily, Israel, a staunch ally of the United States that support its policies and protects its interests in the Middle East is attacked constantly by Obama and its leadership belittled.”

Obama Five Pillar Foreign Policy for Dummies. Pillar Number 2: If it was not for US policies in the Middle East, the region would smell like roses.

“Primary to Obama’s foreign policy are the words he says or don’t say to express a twisted belief that America is guilty for all the problems manifesting anger in the Middle East. If it was not for America, the region would be flickering with rainbow lights, smelling like roses, and blessing humankind with its message of peace.”

“As an American, you have an obligation to apologize to every stone age primate says Barack Obama. If you do, these scumdafts won’t behead Americans and post their savagery on YouTube. Obama apologized, so they spared James Foley. You see, it really does work. That’s his genius.”

Obama Five Pillar Foreign Policy for Dummies. Pillar Number 3: The Islamists are America-loving angels we need to court even as terror rains on their enemies. As such, never call them Islamists or terrorists.

“For Obama, all humans could be manipulated by his magic, and evil bounces off his chest like a bullet bounces off Superman. Evil, to Barack Obama, are tales your mother read to you as bedtime stories. For him, this is particularly true of all Islamists to begin with the Muslim Brotherhood who found themselves ascending to power in Egypt thanks to his ignorance. It took ISIS for it to behead James Foley before Obama decided to act, but not before apologizing profusely to the Islamists and the terrorists he cannot recognize.”

“Barack Obama believes the American public is stupid. So said his ObamaCare architect Jonathan Gruber. Stupidity begets no regrettable action and no guilt. In fact, Obama has awarded himself a Carte Blanche to lie to the American people at will when it comes to foreign policy (Hello US-Iran deal). No other U.S. President has made so many promises and has kept any of them as Barack Obama has, even with a Red Line he expected no one to care drawing it and as fast erasing it.”

“Obama has a super secret agenda only he, Michelle, and Valerie Jarrett discuss during their private meetings in the East Wing. Jarrett allots much time to masking the agenda with the help of much chaos and confusion. Confronting Iran in Yemen and working with Iran in Iraq is part of that complicated scenario that keeps people off their track. Step back and look at the empowerment of everything terrorist by Barack Obama to get a sense of where he is going. Starting with Iran.”

“Helping the Saudi coalition in Yemen helps al-Qaeda indirectly. Helping the Iranians defeat ISIS in Iraq helps the Shiite violent militias. This can only lead to more chaos, and more chaos helps America’s enemies like Iran and Russia while it weakens our allies like Israel and Saudi Arabia.”

Fifty Shades of Patriotism
For Heaven’s Sake, We Are the United States of America
Obama’s chocolate factory
Slippery Barack Obama 976