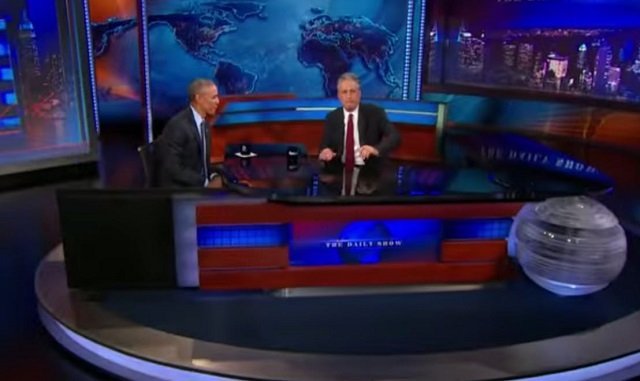 July 22, 2015 9:32 am 0
Bahrainis Deserve Their Freedom
What Use is Killing Bin Laden if Policy Grows Another 100?
Whomever Said Obama is Like Reagan Should Be Exiled to Iran

As President Barack Obama appears on the Jon Stewart show to joke and pitch his Iran deal, the Washington Post reporter that Obama neglected to free from Iranian savagery starts his second year in an Iranian prison.

President Barack Obama’s campaign to convince Congress to support the Iran nuclear deal led him on Tuesday to a veterans’ convention and The Daily Show, where he took jabs at those opposing the agreement having totally forgotten the four Americans held illegally by Iran.

In a back and forth on Comedy Central’s nightly political satire show, Obama pushed back against hard questions from host Jon Stewart.

“This is an adversary. They are anti-American, anti-Semitic, they sponsor terrorist organizations like Hizbollah,” Obama said of Iran.

“Sounds like a good partner for peace,” Stewart responded sarcastically. Stewart forgot to add “If it changes them”

Meanwhile, Jason Rezaian, the Washington Post correspondent on trial for spying on Iran that Obama neglected to save from the Iranian jaws of terror began a second year behind bars on Wednesday with his family increasingly concerned about his health.

This is the real Barack Obama. Obama appears on Jon Stewart to joke while Americans languish in Iranian prisons.

Rezaian, 39, faces charges including “espionage, collaboration with hostile governments, gathering classified information and disseminating propaganda against the Islamic republic”, according to his lawyer.

After three trial sessions since late May, the “slow-motion judicial process” may soon come to an end, the Post’s executive editor Martin Baron said in a statement released on Monday.

His lawyer Leila Ahsan has been told by the Iranian authorities “that the next hearing will ‘almost certainly’ be the last, though no date has yet been set,” he added.

“There can be no reason for further delay,” Baron said. “Any fair outcome would clear Jason of these manufactured charges so that he can be released and reunited with his family.”

AFP and Reuters contributed to this article.