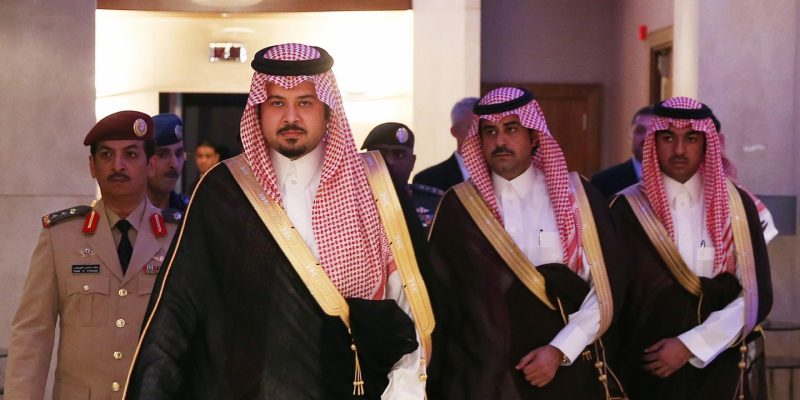 A LOOSELY KNIT collection of Syrian rebel fighters set up positions on March 18, 2013, and fired several barrages of rockets at targets in the heart of Damascus, Bashar al-Assad’s capital. The attack was a brazen show of force by rebels under the banner of the Free Syrian Army, targeting the presidential palace, Damascus International Airport, and a government security compound. It sent a chilling message to the regime about its increasingly shaky hold on the country, two years after an uprising against its rule began.

Behind the attacks, the influence of a foreign power loomed. According to a top-secret National Security Agency document provided by whistleblower Edward Snowden, the March 2013 rocket attacks were directly ordered by a member of the Saudi royal family, Prince Salman bin Sultan, to help mark the second anniversary of the Syrian revolution. Salman had provided 120 tons of explosives and other weaponry to opposition forces, giving them instructions to “light up Damascus” and “flatten” the airport, the document, produced by U.S. government surveillance on Syrian opposition factions, shows.

The Saudis were long bent on unseating Assad. Salman was one of the key Saudi officials responsible for prosecuting the war in Syria, serving as a high-ranking intelligence official before being promoted to deputy minister of defense later in 2013.

The NSA document provides a glimpse into how the war had evolved from its early stages of popular uprisings and repression. By the time of the March 2013 attack, arguably the most salient dynamic in the conflict was the foreign powers on both sides fueling what appeared to be a bloody, entrenched stalemate. The document points to how deeply these foreign powers would become involved in parts of the armed uprising, even choosing specific operations for their local allies to carry out.

“A revolution, a proxy war, and a civil war are not necessarily mutually exclusive of each other,” said Aron Lund, an expert on Syria at The Century Foundation, a New York-based think tank. “All these things can exist simultaneously in the same country, as seems to have been the case in Syria.”

The uprising against the Assad regime in 2011 was in line with a wave of civil revolutions that broke out across the Middle East that year. Thousands of people living under much-reviled dictatorships sought to overthrow their rulers, launching mass demonstrations and sometimes engaging in armed attacks. Inspired by initial successes in Tunisia and Egypt, Syrians took to the streets in huge numbers. But their uprising would not be able to chart the same peaceful trajectory. In response to the protests, the Assad regime and its security forces waged an open war against their own people, refusing to countenance any change in power.

The crackdown shocked international observers. The then-largely civilian uprising, faced with extermination or resistance, took up arms. Assad’s response, though, coupled with the burgeoning revolution, also opened the door for the involvement of unscrupulous foreign powers. Since the conflict began, both sides of Syria’s civil war have received significant support from abroad. Opposition groups got help from Turkey, Qatar, and Saudi Arabia, while the government has been propped up by the efforts of Iran and Russia.

The March 2013 attacks in Damascus provide a concrete example of the role that foreign powers played in the day-to-day reality of the conflict. A number of videos posted by Syrian opposition media on the day of the attacks purport to show rebel fighters firing rockets at the same sites mentioned in the U.S. document. Local media reports from that day described an attack in which rockets struck within the areas of the presidential palace, a local government security branch, and the airport. A representative of the U.K.-based Syrian Observatory for Human Rights quoted in a story the next day reporting the attacks, stating that they were unable to confirm whether they resulted in casualties.

The U.S. document, based on surveillance of “opposition plans and operations,” did not indicate whether the attacks deliberately targeted civilians or involved any extremist groups — but it did show that American spies found out about the attacks several days before they were launched.

Analyzing the videos of the attacks posted online by opposition factions, Lund said, “There appear to be several different groups involved, all identifying themselves as different factions of the ‘Free Syrian Army,’ and all apparently linking back to the same sponsor.”

Because of the fragmentary nature of the Syrian opposition since the early days of the conflict, it is difficult to know who else received arms or what strategy, if any, was being employed by outside sponsors to try and place various factions under central control. Over time, however, this chaotic strategic environment aided the cause of terrorist groups in Syria, as well as the regime.