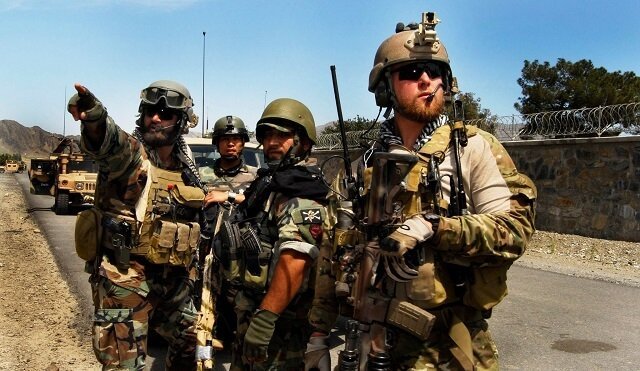 Not One Western Bullet Fired Against Shiite Terror, Plenty of Missiles Against Sunni Terror

If Barack Obama wants to spark a sectarian war in the Middle East. not one Western bullet fired against Shiite terror, but plenty of missiles against Sunni terror will suffice.

If Barack Obama wants to recruit Sunni terrorists for ISIS and al-Qaeda, not one Western bullet fired against Shiite terror, but plenty of missiles against Sunni terror is all he needs to do.

As the world watches Assad butcher civilians in Syria, Barack Obama, the merchant of death, reacts by sending Special U.S. Forces against ISIS.

War is costly, but terror is profitable.

As Syria becomes the battleground for mass murderers and psychopaths like Baschar al-Assad and Ali Khamenei, and as innocent civilians die in the tens of thousands, the world over is profiting from this war. This is why not one Western bullet fired against Shiite terror, but plenty of missiles against Sunni terror.

Weapons manufacturers are happy. Terror government contractors and experts are happy. Fear instilled in the general public is bonanza time for the ratings.

The more killings, the happier people are, and the more profits circulate around. Bush was serious about “War on Terror”, but Barack Obama showed the few how “To Profit From Terror”.

So, let’s spark that war to last a little longer by sending a small, very small, contingent of Special U.S. Forces into Syria to battle ISIS, but not Assad. Just enough to make more Sunnis angrier and deadlier. We need to feed terror with terrorists, otherwise its glow will suffocate from lack of oxygen.

Who said anything about destroying terror? No, no, we just want terror to last long enough to profit some more from it. The idea is not to eradicate it or destroy it.

Once upon a time, we believed stability was good for the marketplace, now we are learning just the opposite is true. Long live Assad, the Capitalist provider par excellence.

Dumb ass Cold War fence sitters. The new way is for all of us to cooperate to provoke terror. Even if that means hundreds of thousands die, and millions become refugees.

G*d forbids we eradicate terror by battling Iran and Assad, as well as ISIS and al-Qaeda, with resolve and conviction. No, we just want Barack Obama to make us look like we are eradicating terror, but leave it intact so that we can inject more profits in the marketplace.

Not One Western Bullet Fired Against Shiite Terror, Plenty of Missiles Against Sunni Terror