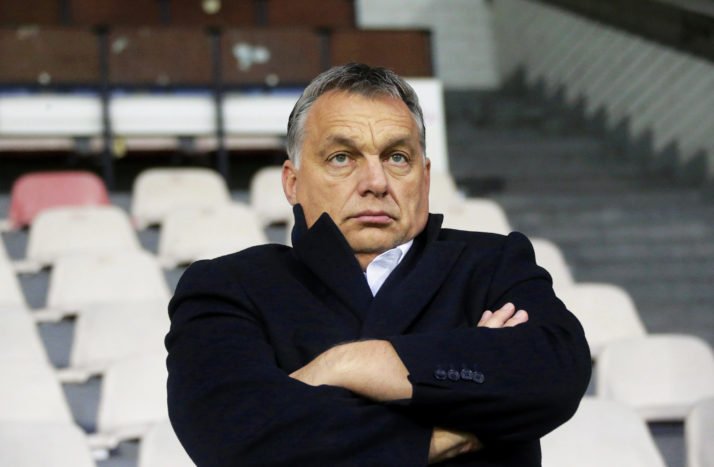 Next Baby Hitler Coming From Hungary

Ahmed Hamed was among a group of migrants that crossed into Hungary on Sept. 16, 2015 from Serbia, pelting policemen with rocks before hundreds of migrants forced open the border gate and police fired water cannon and teargas. TFS believes the next baby Hitler coming from Hungary.

Viktor Orban’s Government could have deported Ahmed Hamed quietly, if found guilty of pelting police; thus, avoiding to show off the next baby Hitler coming from Hungary. Orban is very close to Vladimir Putin whose terror against Syrian civilians is well documented.

Hamed was provisionally sentenced in March to seven years in jail for illegally crossing the border. The court labeled pelting a policeman as a “terrorist act”.

Pelting a policeman is an act of terror in Hungary. Hungary, under Orban, is becoming one large Lebensborn baby factory. In Nazi Germany, the Lebensborn experiment produced “Ordinary Folks“.

Thursday’s final ruling in the case, which has drawn criticism of Hungary’s hardline stance against Muslim immigration to Europe, relaxed the sentence to five.

Hamed’s case featured in a report on the rule of law in Hungary, which culminated last week in an unprecedented decision by the European Parliament to sanction Hungary for flouting EU rules on democracy, civil rights and corruption.

Prime Minister Viktor Orban’s tough stance against immigration has pitted Hungary against fellow European Union members Germany and France. As well as building a steel fence on its southern border, Hungary has toughened laws on immigration and clamped down on non-government organizations that Orban accuses of supporting humanitarian work to settle immigrants.

Human rights group Amnesty International has said it believed the Hungarian authorities unduly applied the terrorism clause. On Tuesday, it submitted a petition to the Hungarian Justice Ministry calling for Hamed’s release.

The court found that the terrorism clause was applicable as Hamed and others acted in concert to force the border open.

The final ruling relaxed the seven-year verdict issued in March as the court considered new mitigating circumstances in the case, Judge Erik Mezolaki told a courtroom packed with dozens of journalists.

“The objective of punishment is to deter either the accused or anyone else from committing a crime,” Mezolaki said. “Retribution does not fall under the scope of punishment.”

How Nice of Viktor Orban

The court considered the fact that Hamed does not speak Hungarian. Furthermore, the court also cited, as mitigating circumstances, that he was separated from his family. Hamed has been in prison for more than three years.

That means he is likely to serve two years in jail.

As such, the European Parliament’s report said the court ruling issued in March raised “the issue of proper application of the laws against terrorism in Hungary, as well as the right to a fair trial.”

Next Baby Hitler Coming From Hungary