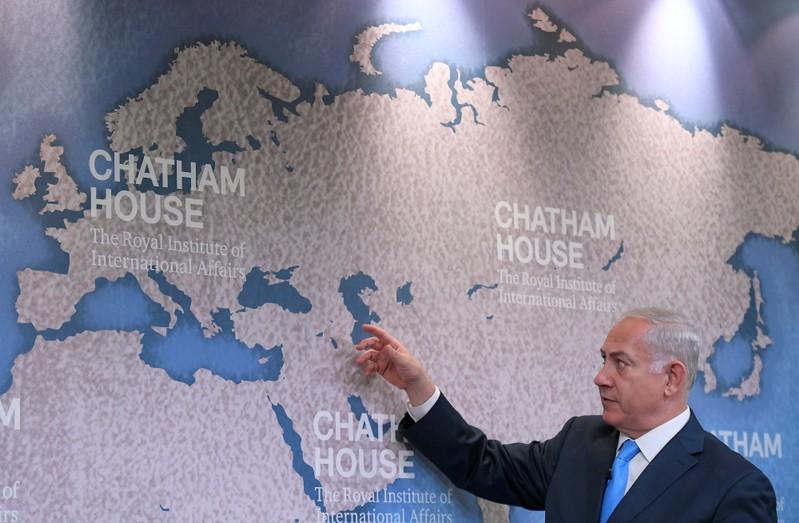 Source: The Guardian – by Patrick Wintour (Netanyahu says he will not let Iran take strategic control inside Syria)

Netanyahu says he will not allow Iran to take control inside Syria with any sustained strategic presence such as retaining militias, airbases close to Israel or access to sea ports.

He claimed in a speech at Chatham House in London on Friday that “Iran had come into the Syrian war to Lebanon-ise Syria economically and militarily”.

“They want to leave their army, their airbases and fighter aircraft within seconds of Israel and we are not going to let that happen. We do not say that lightly. We mean what we say and we back it with action.”

Israel has already bombed what it regards as Hezbollah bases inside Syria in the belief arms were being smuggled in that may pose a threat to Israel. It was reported on Wednesday that Israeli jets targeted a weapons depot situated in rural areas around Hisya, south of the Syrian city of Homs.

But Netanyahu’s latest, more comprehensive message about Iranian intentions in Syria suggest Israel is prepared to set wider red lines and prepare for a deeper confrontation with Iran to ensure it is not a beneficiary of any end to the civil war in Syria.

Iran, he said, citing the veteran American diplomat Henry Kissinger, “is a cause not a country”. He said it “was devouring one nation after another either directly or by proxy” and, in Syria, had imported tens of thousands of shia militia fighters.

He said a “dramatic shift” in Israeli-Arab relations was under way, leading to an understanding with moderate authoritarian states opposed to Iran. “The good guys are getting together with Israel in a new way, forming an effective alliance to counter the aggression of Iran. It has a great promise of peace,” he said.

He claimed attitudes to Israel were mellowing not just among the elites in the Arab world, but across Arab social media.

Speaking in the midst of the commemoration of the centenary of the Balfour Declaration, Netanyahu also welcomed the Trump administration’s approach to seeking peace between Israeli and the Palestinians, but hinted at his doubts about the US team, saying: “To think out of the box, you have to know the box.”

He also suggested strict limits on any sovereignty for a future Palestinian state saying: “I think it is time we reassess the model of sovereignty and whether that is applicable everywhere in the world.”

He implied there would be no peace settlement that left Palestine in charge of its own security, saying he was prepared to “trade land for peace, but not land for rockets which was all that had happened in the past”. Palestinians could have the power to govern themselves but not to threaten others, he said.

Although he repeatedly denounced Iran as a medieval state and warned Israel will not allow Iran to develop a bomb, he stressed he was not necessarily seeing the Iran nuclear deal as jettisoned in its entirety, but instead reshaped. He said he had not called for the deal necessarily to be nixed, a position he believes EU powers have not fully understood.

The required changes include the issues of inspections on military sites, “sunset clauses” and the portion of the agreement allowing Iran’s ability to enrich uranium and develop centrifuges, which automatically expires after a set time.

The problem with the deal, Netanyahu said, is that if Iran does nothing and keeps to the agreement, it will be able to produce nuclear weapons within seconds of the agreement expiring, he claimed.

They could break out to multiple bombs within seconds of the deal ending, he said.