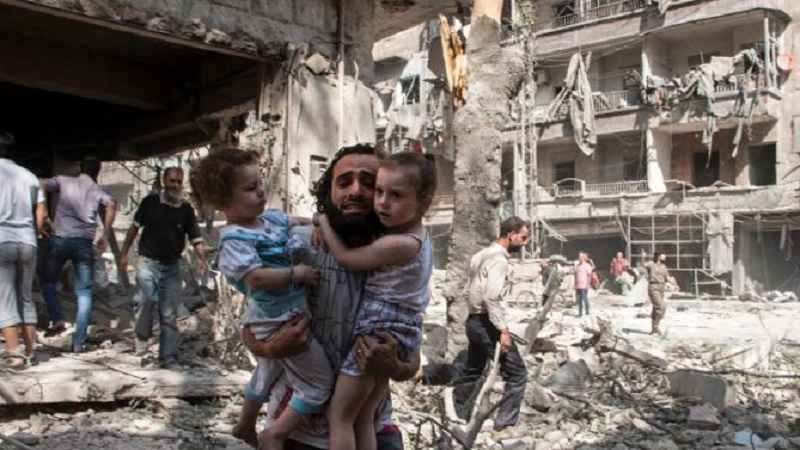 Russian President Vladimir Putin told his counterparts from Turkey and Iran on Wednesday that there was a need for peaceful dialogue between the opposing forces in Syria’s civil war.Neither Russia nor Iran can be part of the Syrian solution. And if Turkey continues to back the Muslim Brotherhood, add Turkey to the list.

The Caesar Act is mobilizing Vladimir Putin to concoct a plan outside the U.S. influence to claim the high ground when he imposes the Assad terror on Syrians and the outside world. The problem has been and remains Russia and Iran submitting the Syrian people to Assad psychosis; something neither country is willing to reconsider. This makes any effort by both to create a mirage as futile as Donald Trump bullying Vladimir Putin.

An inclusive inter-Syrian dialogue should be actively promoted within the framework of the constitutional committee in Geneva. I propose to support this process, to help the participants to meet and start a direct dialogue.

Under a diplomatic process dating back to 2017, Russia and Turkey agreed to work to reduce fighting.

In a joint statement, Russia, Turkey and Iran “expressed the conviction” that Syria’s war had no military solution. They agreed to settle it only via a political process. In Damascus, Assad shared no such sentiments as his war machine continues to bomb civilians.

They also welcomed a meeting of the Syrian constitutional committee in August, a gathering that is meant to be a step forward in what the United Nations says will be a long road to political rapprochement, followed by elections. As long as Russia does not rig Syrian elections like Putin rigged his to his own personal benefit.

They agreed to hold the next trilateral summit on Syria in Iran, but gave no date, saying it would meet when possible. To select Iran shows little regard for the will and the wishes of the majority of Syrians who reject Iranian influence and occupation of Syria. This is no different than Adolph Hitler submitting the French to sign their surrender in the same train wagon Germans signed theirs after WWI.

Erdogan also told the video conference that the priority for Syria is a lasting solution to the conflict. He talked about: “Achievement of calm in the field and the protection of Syria’s political unity and territorial integrity. We will continue to do all we can so that our neighbor Syria finds peace, security and stability soon.”

Rouhani called the presence of U.S. forces in Syria “illegitimate”, urging them to quit immediately. He also pledged Iran’s support for the “legal government” of Baschar Al-Assad. His words demonstrated why Iran cannot be part of the solution. The Mullahs are hell-bent on torturing Syrians through Assad.

AReuters contributed to this article.