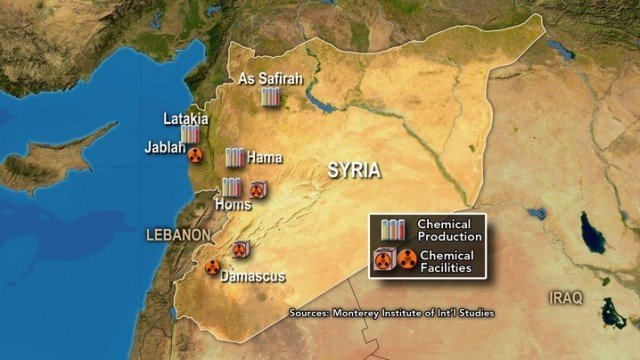 February 13, 2014 8:05 am 0
Syria, the most videotaped war in human history
Syria’s Assad accused of boosting Al-Qaeda with secret oil deals
Al-Qaeda in Syria

IS PRESIDENT Obama creeping toward a rethinking of his Syria policy? Some words he spoke Tuesday raised our hopes. At a news conference with French President François Hollande, Mr. Obama described the Syrian conflict, which he dismissed five months ago as “someone else’s civil war,” as “one of our highest national security priorities.” He acknowledged that his diplomatic strategy is “far from achieving” its aim of a political solution, while “we still have a horrendous situation on the ground.”

In essence, Mr. Obama confirmed what Secretary of State John F. Kerry privately acknowledged to a group of congressmen 10 days ago: U.S. policy is failing even as the threat to U.S. interests grows. “Nobody is going to deny there’s enormous frustration here,” the president said.

The atrocities committed daily by the Syrian regime, even as peace talks in Geneva sputter, may be influencing Mr. Obama’s thinking. So, too, may the failure of efforts at the United Nations to alleviate the dire humanitarian crisis. Mr. Obama’s strategy has counted on Russian cooperation, but Tuesday the president acknowledged that Russia is obstructing U.N. Security Council action to open aid corridors for starving civilians.

Above all, he can hardly ignore warnings delivered by his top intelligence aides,Director of National Intelligence James R. Clapper Jr. and CIA Director John Brennan, who in the past two weeks said in public testimony to Congress that al-Qaeda is developing a refuge in eastern Syria that could be used to launch attacks against the United States. Having previously belittled the Syrian al-Qaeda branch as “JV,” Mr. Obama sounded more sober Tuesday in saying that “there are extremists who have moved into the vacuum in certain portions of Syria in a way that could threaten us over the long term.” Talks in Geneva won’t address that threat, nor can a president with three years left in office necessarily expect that “the long term” will arrive afterward.

What action is possible? Mr. Obama and his aides have often argued that the only alternative to their present policy is an Iraq-style invasion. So it was refreshing to hear Mr. Obama hint at other options. He said his administration would “continue to strengthen the moderate opposition”; we hope that means a return to a plan for stepped-up training that the president embraced and then abandoned last year.

Correctly, Mr. Obama cited the deal on Syria’s chemical weapons — in which a U.S. threat to carry out air strikes quickly produced a regime commitment to hand over its arsenal — as “an example of the judicious, wise use of military action.” He went on to ask “whether we can duplicate that kind of process when it comes to the larger resolution of the problem.” Maybe not, if “resolution” means a quick end to this terrible war. But the threat of force could help open humanitarian corridors and stop atrocities such as the dropping of shrapnel-filled “barrel bombs” on civilian targets.

Mr. Obama said: “Right now we don’t think there’s a military solution per se .?.?. but the situation is fluid and we are continuing to explore every possible avenue to solve this problem.” That is good news. The president has taken an important step in recognizing the gravity of developments in Syria. Now he needs to act on that analysis.