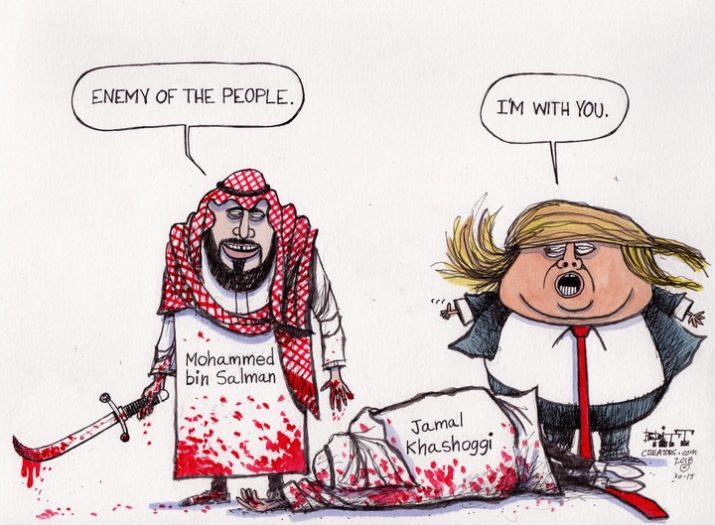 December 29, 2018 6:12 am 0
Ten Rules of Leadership for Syria
If we do not defeat Assad, ISIL may defeat us
Hell to Break Loose Courtesy of Barack Obama

If you ask the Arab street today who is the most hated Arab leader, you might get many to answer Baschar al-Assad causing the death of 600,000 people, some may mention Bashir al-Omar indicted for crimes against humanity for his role in the Darfur genocide, but the majority would give you the most definitive answer of Mohammad bin Salman (MbS) of Saudi Arabia.

Imagine that. MbS killed one Saudi journalist (That we know about) and the other two have been responsible for the death of more than 900,000 people. What gives, one might ask. Why is MbS the most hated Arab leader in the world?

Mohammad bin Salman became the crown prince of Saudi Arabia in 2017. His appearance on stage was most likely the biggest PR job in modern history. The prince spent lavishly to promote this healthy image of a reformer with a vision that baffled the imagination of many established visionaries. To see such liberal youth rising in the religiously conservative Saudi Arabia was like fresh air in the air-sealed Sunni country of some 25 million people.

Besides the transformational ideas MbS promoted, this yearling also promised more freedom for women, a subject that has haunted Saudi Arabia for decades considering their abhorrent treatment. He also promised to rein-in the conservative Wahhabi establishment responsible for many of the societal ills unsettling the kingdom. In addition to promoting better relations with the West based on a new Saudi liberal order, the prince also extended a friendly olive branch to the State of Israel. For Saudi Arabia to rehabilitate its foreign policy on the basis of pragmatism rather than religious madness, it was a shock for the Muslim world. The last time that world saw this paradigm shift was during Anwar Sadat’s presidency, which ended in the peace agreement with Israel.

To demonstrate this new goodwill, MbS even purchased for $450m the painting of Jesus by Leonardo DaVinci. Christian Jesus picture hanging in a palace in Riyadh is beyond revolutionary. It breaks three anomalies in Islam: Displaying pictures of Prophets, representing a pure Christian symbol, and embracing a gay artist. This highly-publicized purchase was planned to further distract us from MbS future deeds of evil.

Once the vision, the image, the PR, the gestures, the stately visits, the pleasantly shocking sound bites, and the spin were all the media’s rage, MbS moved, secretly, closer to who he really was. A psychotic charlatan parading as a savior.

Right out of a mafia movie, MbS locked-up the richest men in Saudi Arabia and stripped them of their money for his own personal bank accounts. Why wait years to accumulate wealth through corrupt practices when you can shakedown the rich using your power? Instead of 10 years to amass wealth, MbS stole other people’s money in 10 days. Stories of torture of these powerful businessmen began surfacing but many shelved those thoughts having been wooed by the PR.

Then MbS, using his right-hand man, a thug named Saud al-Qahtani, beat a sitting prime minister of a sovereign nation before he stripped him of the billions his father made legally in the construction business in Saudi Arabia. The story leaked at the highest levels and began filtering down to western influencers and journalists. Still many were skeptical that this charming prince who recently gave women the right to drive in Saudi Arabia could do such a thing.

All his deeds were followed by stories of torturing women in prisons, and locking-up dissidents at a rate ten times that of 2016. While the PR machine was broadcasting beautiful lies, MbS machine was dispensing terror at home and in Yemen, a war he started.

Nonetheless, the PR machine operated without a hitch. Until MbS killed Jamal Khashoggi, a journalist writing for the Washington post.

Killing Jamal Khashoggi with such ease for so little shocked the world. Especially when the world became privy to the minute details of MbS grisly crime. For close to six weeks, headlines around the world became obsessed with the Khashoggi murder because no one could believe that little red riding hood is a wolf in disguise. Then and there, MbS became the most hated Arab leader second to Assad of Syria.

Today, many believe that MbS cardinal sin was selling himself as an over-achiever visionary with high expectations of his accomplishments. When in fact he was just a princely thug torturing and killing his own people, and beating men of stature and substance before he robs them of their life earnings. Neither Assad, nor al-Omar ever pretended to be anything but the criminals that they are.  With both, what you see is what you get.

Not true of MbS. What we saw is not what we got. The man pulled wool over everyone’s eyes, and this is why his ungraceful downfall resonated across continents. By far, he is most hated Arab leader bar none. By everyone he touched or fooled.

One of the reasons he approached the Israelis with his supposed liberal views was to secure their support in Congress. Upon seeing MbS for the man that he is, Israel has abandoned any hope MbS might one day make a difference with regard to driving Arabs towards peaceful co-existence. His actions angered the Israelis who pitted much hope on him. If the U.S. Senate condemned MbS recently, it is because Israel has abandoned him for his trickery.

The lesson learned from the MbS fiasco is not to sell yourself high when your real value scores left-sided zeros. In the barrel of life, cream rises to the top and muck settles at the bottom. MbS has settled where he belongs.