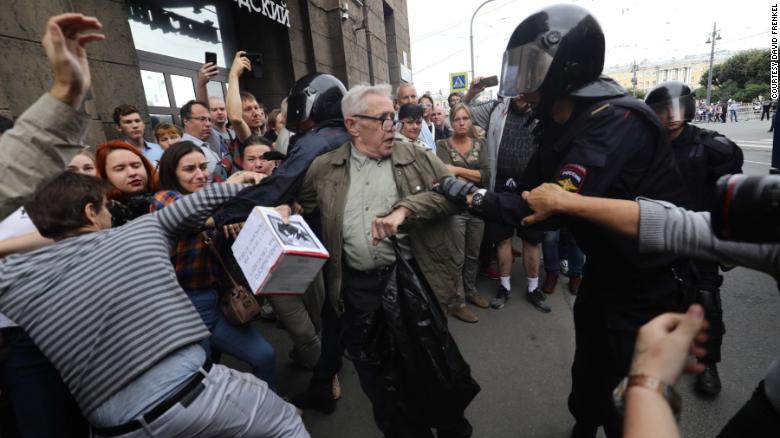 August 11, 2019 8:40 am 0
The Donald and the Demagogues
Falafel Interviews Prince al-Waleed bin Talal
Select the Candidate Whose Advisers Are Known Commodities

Tens of thousands of people rallied Saturday against the exclusion of some city council candidates from Moscow’s upcoming election, turning out for one of the Russian capital’s biggest political protests in years. The Moscow election protest attracts huge crowds.

After the rally, which was officially sanctioned, hundreds of participants streamed to an area near the presidential administration building to continue with an unauthorized demonstration. They were confronted by phalanxes of riot police and the arrest-monitoring group OVD-Info said 136 people were detained.

The protests may affect Syrian politics if Putin begins to turn inward to save his legacy.

The rally was the fourth consecutive weekend demonstration in Moscow over the local election. The determined opposition has prompted protests in other cities, reflecting widespread frustration with Russia’s tightly controlled politics.

OVD-Info also said 86 people were arrested Saturday in St. Petersburg at an unsanctioned demonstration in support of the Moscow protests.

Unlike the previous two Moscow rallies, where police harshly dispersed the crowds and detained thousands of demonstrators, Saturday’s gathering in a neighborhood with relatively few passers-by was officially sanctioned.

It was held on a street flanked by high buildings and sandwiched between two busy thoroughfares. Putin fears what may come next as Moscovites protest his dictatorial hold unto power.

Lyubov Sobol, one of the city council candidates denied a place on the ballot and a spearhead of the election protest, was among those detained in Moscow on Saturday.

A video on Sobol’s Twitter feed showed officers breaking into her office as she demanded an explanation from them.

While Vladimir Putin’s policies have largely been targeting NATO and the US, his neglect of domestic politics is coming home to roost. The Russian economy is stagnating under the weight of too many guns and too few butter.