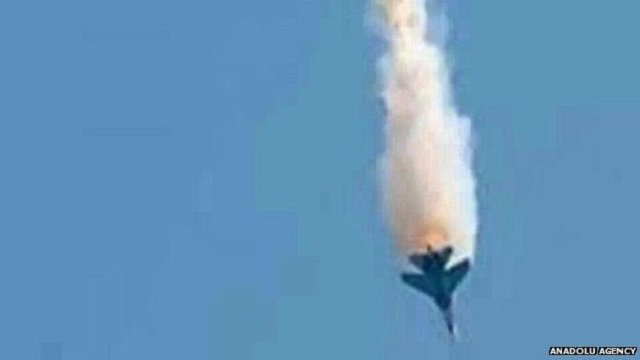 Syrian moderate rebels shot down a Syrian government warplane with anti-aircraft fire on Wednesday in the western province of Hama, forcing its pilot to eject. The pilot died after his parachute failed to deploy.

Rebels have brought down government aircraft before in Syria’s civil war but only rarely as they lack significant anti-aircraft capability. They have stepped up calls to be supplied with anti-aircraft missiles since Russia’s air force intervened on the side of the psychopath Baschar al-Assad in the conflict.

The Syrian air force jet was downed in northwest Hama, near the town of Kafr Nabuda, where fighting has been raging between insurgents and government forces backed by air cover.

Rebels had late on Tuesday taken over Tel Othman, a hill nearby, said the Observatory, which monitors Syria’s civil war using a network of sources on the ground.

“We targeted the (Russian-built) MiG aircraft while it was striking rebel positions on the front of Kafr Nabuda. We shot at it with our medium machine guns,” Yasser Shehadeh of the al-Wosta division told Reuters via Internet messaging.

“One of the shots hit the plane, and we saw smoke coming out of it, then it crashed… near a regime-held area… we don’t know about the fate of the pilot, but he probably got killed.”

Insurgents shot down a helicopter near Kafr Nabuda last month. Other rebels said in June that they had shot down a MiG in southern Syria.

Syrian and Russian air raids continue to target rebels in western and northwestern Syria – particularly in the embattled provinces of Hama, Homs, Idlib and Aleppo – more than a month after Moscow’s intervention.

Happy you apologized, Mr. President
World Leaders Legacies Written With Their Silence Over the Assad Crimes
Sadism on the Streets, Sadism in the Propaganda
Syria News 1213 Syrian Revolution 1335